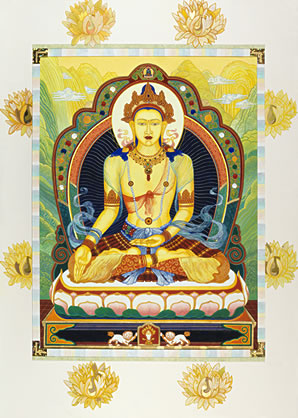 IDEA Space
Free and open to the public

Using the exhibition Mandala of Enlightenment exhibition as inspiration, Dr. Gardiner and Ms. Bender will discuss ways that contemporary Buddhism is changing America and Americans are changing Buddhism.

Sarah Bender: A Zen Buddhist, Sarah gives talks, leads classes and retreats, and works with individual Zen students at Springs Mountain Sangha in Colorado Springs. Sarah began her practice with the Honolulu Diamond Sangha in 1979 and has studied with Joan Sutherland, Roshi, and David Weinstein, Roshi, since 1997. From 2001 to 2006 she served as the meditation instructor for SMS, and in 2006 became the sangha’s first resident teacher. Sarah was also the Cadet Chapel Buddhist Program Leader for the United States Air Force Academy for many years, and she leads occasional retreats for the Wet Mountain Sangha, in Pueblo.

David Gardiner: Dr. David Gardiner has taught Buddhism and related subjects in the Religion Department of Colorado College in Colorado Springs since 1998. He began learning Buddhism in the late 1970’s at Amherst College with Robert Thurman, and also with Tibetan lamas who lived with Dr. Thurman. This was followed by time in India and Nepal working under Tibetan teachers. He then went to the University of Virginia for his M.A. degree, where he studied Madhyamaka philosophy with Jeffrey Hopkins and Japanese Buddhism with Paul Groner. Dr. Gardiner completed his Ph.D. in 1995 at Stanford University in East Asian Religions. Alongside his work in teaching and research, he gives talks on Buddhism throughout Colorado, maintains a practice based on Tibetan traditions, and runs a non-profit educational Buddhist organization in Colorado Springs called BodhiMind Center.

Sponsored by: The Colorado College Cultural Attractions Fund and the Department of Religion