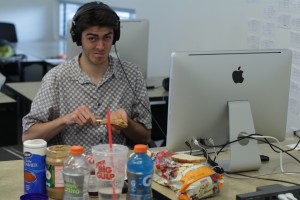 I was going to title this post something cute like “The 12 Days of Editing”, but I think this is a more deserving title.

The editing room resembles my room more so than my actual room. I think I have more food around the desktop computer than I do in my fridge, and I definitely have spent more time in the editing room than I have in my house or sleeping combined. My files are encoding now from some last minute shooting today, so I have a little time to catch up. It’s kind of like I’m Neo when he touches the sticky, mirror like material in The Matrix and can’t get undone. It’s consuming and relentless.

I don’t think there are many other ways to describe the editing process than to give you a Sports Center esque play by play of my psychological state over the past week.

Monday: I just finished shooting, and I am tired from finishing shooting, but need to sleep a little more than I did during shooting week so I can spend time editing. Encoding all of my files to just begin editing took 2 days, and my compressed video files ballooned to fill my 1 TB hard drive, so I needed to switch everything to a bigger drive before I could even begin to edit. We meet as a class to discuss our selects, or our best footage we shot. I go through hours of footage to find the best 20 minutes. And it’s garbage.

Tuesday: We try to put our best footage together into a timeline, basically an assembly of seemingly important things that may be in our final films. At this point I have my selects, but they are incoherent and redundant. I don’t even remember if I showed anything, but if I did, clearly it wasn’t memorable. I’m beginning to doubt if I can pull this off, but don’t want to start staying up late yet.

Wednesday: I have no film. At least that is what is going on in my head. Tuesday night I reached the beginning of my mild freak out stage. If you have ever seen Cameron in Ferris Bueller’s Day Off, my freak out is similar to when Cameron goes catatonic in the back of his Dad’s convertible. We have rough cuts due today, and I have barely anything. I can’t even comprehend what this is. And one of my film’s main characters all of a sudden doesn’t fit into the film. It was so sudden, but I am beginning to understand it needs to happen. 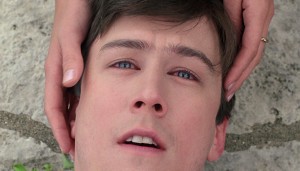 Thursday: Re-shoot day. I realized I am missing the most obvious sound bytes in my film, like where are we? Who are these people? It’s amazing how quickly I jumped into the deep emotional stuff without giving anyone any reason to care. Through transcribing, note cards on the wall, sugar, and caffeine I think I leave the editing lab Thursday night slightly hopeful I have something worth watching. The screenings with the class really help to get some fresh eyes on my project.

Friday: Fine cuts are due, which means one step before the final cut of the film. For me, that means a rough cut. After staying up until like 2 the night before, I come into the lab giving myself about 2 hours to throw something together. The less time I give myself, the easier it is not to be a perfectionist. I have been watching my film for about a week and a half now, so I am not sick of it, but I don’t know what to watch for anymore. I forget that the more I watch it, the more I take out that the audience needs because it’s their first time watching it. Clay and Dylan really help me see the good things in it and to focus on bringing that out more.

Saturday: I realize I need to shoot more. I blew out the sound on half of one of my character’s interviews, so I have to tread carefully around the trouble spots. I am beginning to become overwhelmed because a crucial dance shoot that I need for my film is tomorrow, and I am beginning to stress about how to control light in the room when there is a massive window in the studio. I stay up until 3 trying to find music for my dancers to listen to as I shoot.

Sunday: Sometimes I wake up and forget I am making a film. It comes rushing back pretty quickly. I grab a 7/11 water coffee and donut and try to pull myself together as I incoherently ask for campus safety to open the studio space. Directing seems daunting. With a little sugar I am functioning enough to begin the shooting day. Chance Crail, a rising sophomore who co-directed the short film Elevator Crush, which was actually on the home page, handled a lot of the technical hard stuff that was freaking me out, and just having him in the room was fantastic. Don’t need to figure out cameras and people at the same time, which is hard. And my god we got some great footage. I think there is some potential after all.

Until I finish this film, it won’t seem that good. But that’s the process. We suck it up and hope that in the end we hear everyone clapping and it’s worth it. I cannot wait until I hear that relief from and audience, when all the time I put in to savor and build to the most emotional moments becomes worth it. A month for 8-10 minutes. Until then it’s just delirium and praying.