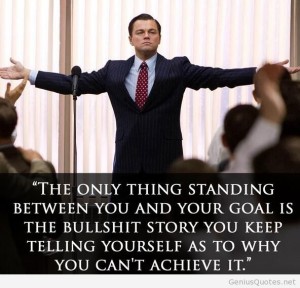 I feel that this quotation sums up shooting week very well. This post was actually from before this week began.

I really love having an audience, but I hate getting on stage.

This whole week we have been preparing and revising our pitches for Rocky Mountain PBS last Wednesday. I should have written last Wednesday, I apologize. I have been re-watching The Wolf of Wall Street for about two weeks, so with enough of watching Jordan Belfort, I think I gave myself the confidence to walk into my pitch knowing that if I sold the film, PBS would eat it up. I really wanted to put a picture of Lio Dicaprio screaming or something, but it didn’t seem to fit, and the DVD box is a bit inappropriate too. I am not saying I hustled PBS, I am not saying I bribed PBS, but a little performance went a long way. Ultimately, our pitches are not our final films. And, in order to make your film sound interesting, it helps to be a performer. I exaggerated a little bit, I made the film sound better than it ultimately will be, but the pitch should be the most perfect vision of the film. It’s what I hope to capture. It is odd that the film only gets less perfect; if I come close to the pitch, I have made an amazing film. My film is going to focus on a dancer’s recovery from a car accident that exiled her from dance for three years. PBS liked it. I really think it will be an emotional story, and it felt great having an audience affirm my film idea.

Now I actually have to do it. We all looked over each other’s production schedule, and Clay gave our group almost unanimous feedback; be more emotional in your interview questions. Documentary isn’t journalism. We aren’t “documenting” anything, we are crafting emotion. We met with a CC alum named Daniel Junge, who won an Academy Award for Saving Face, an HBO doc exploring acid attacks in Pakistan. He said he thinks it’s actually rather insulting to call a filmmaker a “documentarian” for exactly that reason. It’s art, not reality. So, when we interview our subjects, we aren;t looking for facts. We are, but second to emotion. Instead of saying, “tell me about your car accident,” I give the subject permission to express more emotion when I say, “You’re in your car, and you hit the barrier. You try to overcorrect, but you can’t control the car, and it begins to roll. What was that moment like for you?”

Angela said it pretty well that we have to forget perfection. Nothing ever happens when I wait to make the perfect choice. I sat on my couch today practically catatonic for an hour thinking about shooting and what might go wrong. It doesn’t help. I just have to get myself behind the camera and it should be okay. And hope.