A Giant Leap for Womankind

We’re moving from two dimensions to three this week, from painting to sculpture! During the Renaissance, sculptures were a way to influence public perceptions and identity- a form of political propaganda. The sculpture that I fell most in love with is the Juno Fountain, by Bartolomeo Ammannati. The fountain was commissioned by Cosimo I of the Medici family in 1556. If you haven’t heard of the Medici, (or have heard of them a million times but don’t actually know what they were famous for), here’s a refresher. The Medici family basically invented money and banking. Before the Medici, bartering was the standard of trade, but the Medici realized that one way to make money really fast is to just make the money. The family’s riches gave them power and many Medici served in Florentine government. 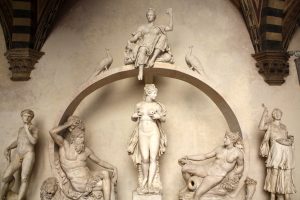 Cosimo I was Duke of Florence at the time, and commissioned the fountain when he was able to connect Florence with a new water source. Though the fountain was intended to be the centerpiece of the Great Council Hall, it was never installed there; Cosimo I came into possession of a Michelangelo statue, and replaced the Juno Fountain with it. Newly homeless, the Juno Fountain was moved temporarily the royal gardens, before it’s component parts were (tragically) scattered around the park. It wasn’t until recently that the pieces of the fountain were reassembled at the Bargello Museum in Florence. To quote Peaches and Herb, “Reunited and it feels so good!”

I love this fountain because it so appropriately addresses the achievement it commemorates. The entire fountain is centered around the idea of the water cycle as it was understood by Aristotle. Aristotle believed that water was created from a combination of the elements: earth, air, water, and fire. Fittingly, the characters depicted in this fountain have allegorical significance, with each representing a natural element. 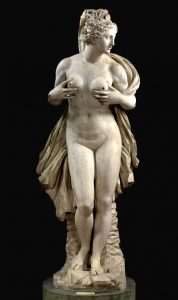 On top of the fountain, sits Juno, protector of the state, with a tambourine in her hand. The clap of her tambourine signifies thunder and lighting, indicating that the gods could strike down any misbehaving mortals. Juno sits atop a stone rainbow, the path of connection between heaven and earth. Beneath the rainbow, lie two bodies of water, personified as a man and a woman. On the left, is Arno, the river that still provides water to the city of Florence. On the right, is Parnassus, the spring that famously arose from  Mt. Helicon, providing poetic inspiration to all who drank from her waters.

Though each of these characters have their charm, the woman in the center of the fountain, Ceres (Roman goddess of Earth and agriculture), is the clear star of the show. Ceres stands with her hands on her breasts, squeezing the fountain water from them. Ironically, fountains that depict a urinating man are very common, yet fountains where women produce water from their breasts are rare. Ceres’ body shape is concave, with her shoulders rounded forward, as she seems to push the water out from within her. Her right cheek is turned to the viewer, an indication of authority and power. With her ocularis and zygomaticus muscles slightly contracted, she appears to be smiling softly, yet knowingly down at us. 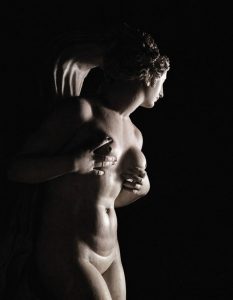 Ceres is completely naked, and her body looks more feminine than most Renaissance statues. Because the Catholic Church was still very influential at the time, females were not allowed to pose nude for artists. As a result, early female nudes looked like female heads atop hulking male bodies. Ceres however, is distinctly female, with rounded features and an hourglass shape. Though females nudes existed before the Juno Fountain, women were depicted as sexual objects of the male gaze. In this piece however, Ceres’ comfort with touching her own body, in a totally non-sexual way, implies agency and self-ownership. Her naturalness suggests lack of self-consciousness and a confidence that is striking even in modern day.

Ceres also represents the feminine power to give and sustain life (by giving water in this sculpture, and by giving birth in real life). The idea of female autonomy, much less feminine power, was unheard of in the Renaissance; yet Ceres seems to sidestep cultural norms.This work may seem like a small step for women, but it’s a giant leap for mankind — or should I say womankind. Kudos to you, Ammannati.

Ciao CC! My name is Quinn and I am (sadly) a senior, (happily) a psychology major from CC. Throughout my time at CC, I became increasingly obsessed with my major, and had more and more trouble forcing myself to branch out into new, uncharted disciplines. By taking "Gazing" in Florence, I am attempting to get a taste of other fields, without veering too far from my one true love- psychology. I am also attempting to get a taste of lots of gelato flavors and some handmade pasta in the process.