On Monday Morning we made the four hour trek to Gothic, Colorado, a small town with a year round population of four just north of Crested Butte. Gothic was a small silver mining town founded in the 1880s, but rebranded itself with the establishment of the Rocky Mountain Biological Laboratory (RMBL) in 1928. While the population of Gothic soars to around 180 in the summer, mostly scientists, research assistants, and families, the town is very quiet in the winter. Part of the reason for this is the mandatory 3 mile hike in with your packs and food as the road is not plowed. This winter has been fairly mild and low to average on snowpack, but we still observed several avalanche slides and slide paths on the way. Last year, 100 year slides ran multiple times, taking out 300 year old trees, crossing over the road, and even hitting some cabins at the base of Gothic mountain.

Once at the lab site, we moved our packs into two cabins, Maroon and Crystal. The Crystal cabin was just completed this past year, and we are one of the first modern groups to stay in Gothic for a winter class and in that cabin! The cabins and site are absolutely stunning, with a 360 degree mountain view. We got lucky with a clear, warm hike in, and great night for stargazing and cards.

Tuesday was packed. We started the day off by meeting one of the caretakers and year-rounders. Rachel gave us an introduction to RMBL as well as her ongoing research on bee species in the area. The research occurring here is impressive in its scope ranging from abiotic to biotic factors and their intersection, as well as the length of time research has been occurring here. Much of this is helpful in examining climate change trends and consequences. We were able to create a snowshoe loop with possible places to explore for our own independent research endeavors this week. The loop was important to keep us on track so that we didn’t disturb other ongoing research projects and data collection. While the town seems totally quiet buried in snow, all the life that exists in this rich ecosystem is still alive through the winter, just in altered states. For the health of the site, its important to disturb as little as possible. 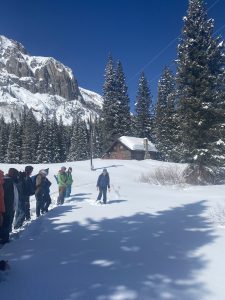 After lunch, we finally got the chance to meet with the man, the myth, the legend, billy barr himself. Yes, its lowercase, he just prefers it that way. If you didn’t watch the linked video from my previous blog, billy is another one of the population of four, and possibly what Gothic is most known for besides the lab. Billy has spent the last 46 years collecting and logging snow data. He lives fully off the grid in his cabin  with his weather station right next door. Billy didn’t intend to spend the rest of his life in Gothic, nor did he intend for his data collection to lead to anything revolutionary. He simply moved here in a time without wifi or cellphones and figured he would keep a log of these natural functions. So much of our days are dictated by weather in the mountains, so he became interested in tracking it. Billy has tracked information on temperature, snow depth, and density the same way and in the same site. While snotel sites in the area are also now collecting this data, billy’s in the oldest and therefore has the most comparative value. He noted definite trends in the data such as more record breaking temperature highs in the last two decades. Meeting billy was much anticipated, and he did not disappoint with how welcoming, witty, and eager he was to show us his special part of the world. He gave us a tour of the cabin he built himself, powered by solar panels and outfitted with a greenhouse, home movie theater, and impressive tea collection. Linked below is the weather site in which data is reported to, as well as some more photos from the day.

We finished up our work for the day with a little fun in the snow. We bounced between shoveling snow into a mound to start building a quinzhee, or snow shelter. We quickly learned that the freezing over night/ development of a sun crust is integral to the soundness of the structure after it caved in during our premature moves to dig out the center. While working on the snow shelter that we hope to sleep 6-8 in one night, we also did a few snow pits. While they were dug on slopes of 0 degrees, we were still able to notice temperature gradients, different hardness layers in the snow, different snow crystal shapes, and even got a slab to fracture and propagate during an extended column test. The third and most educational activity during this period was a hybrid snowball fight baseball game. Another great day in the field! 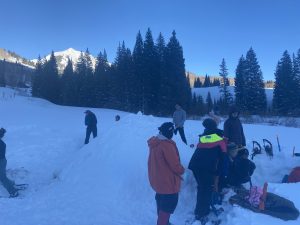 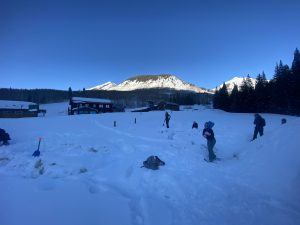 My name is Emily and I am a senior environmental policy major. Originally from Connecticut, I've come to feel at home in the mountains of Colorado. On campus, I am involved in various publications, rugby, and Greek life. I love reading, writing, and cooking, especially with family and friends. I am an avid skier and enjoy hiking, camping, and just getting outside. View more posts