What started as an intriguing collaboration between two professors who prioritize mentoring undergraduates has developed into a four-year, $507,653 grant that soon will support new bacteria studies and exceptional hands-on student research experiences at Colorado College. 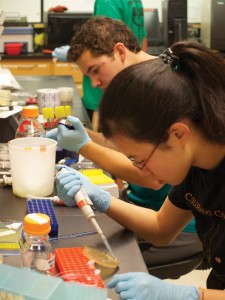 “It’s the whole kielbasa. It’s just thrilling,” said Lostroh, who has her Ph.D. in microbiology and molecular genetics from Harvard and, like Lang, has been teaching at CC since 2003. Lostroh said the grant, which begins with more than $160,000 this first fiscal year, will allow the two scientists to take on experiments they “couldn’t have considered before” and involve more students in the work, especially a diversity of undergraduates. “We will be able to offer more research jobs with a reasonable stipend, so that makes this available to a broader student population,” she explained.

“It’s really incredible,” agreed Lang, who earned her Ph.D. in physics from the University of California at Berkeley. She is excited about moving ahead with this pairing of physics and biology to study how specific bacteria take up DNA for genetic variation. But, she said, the CC students are really her “prime motivator.”

The significance of “teaching the experience,” Lang said, is why she and Lostroh have not only involved 26 students directly in the research since 2009 but have also started the First Year Experience (FYE) course Microbiology and Cellular Biophysics. It gives participating CC first-year students an early and up-close understanding of scientific work.

“It’s their first class at college and they are doing original research — investigating things no one in the world has ever looked at before,” said Lang. In the beginning of the two-block course, the students learn fundamentals about microbial life and how to study it. In the second block, they work in the lab on an independent project that contributes to the overall research Lang and Lostroh are pursuing: observing and characterizing the shape and surface features of native and mutant soil bacteria through an atomic force microscope to shed light on how such organisms transform themselves.

“This is a high level of research for undergraduates,” Lang said. “For most, it is really cool, but it’s also very eye-opening about how science works, how much goes into incremental movement. It can help them decide if this is for them.” Forty students took the course over the past two years and, with the grant in place, the professors plan to offer it again in 2015 and 2017.

“It was super challenging. We had days of lectures and labs, then evenings of imaging the bacteria plus a huge paper at the end, but it was totally worth it,” said Caroline Boyd ’17, who took the FYE course last fall. Now, she’s a paid assistant in the lab. “This is totally different. We have to figure so much out ourselves,” Boyd said about the job. She and another student are working to take an image of two different bacteria on the same plate and analyzing cells that have already been imaged.

“I didn’t know this world at all. You go through months of failure before you get a glimmer of success. Now I’ve learned to accept that and enjoy little accomplishments,” said Boyd, adding that she is thrilled to have this experience as a first-year student. She plans to continue the work in the summer and finds the insight helpful as she considers career options.

Kaleb Roush ’14 thinks “no other class would expose students to such a comprehensive view of what science is.” The biochemistry major helped supervise the FYE class last fall and has also been conducting his own research under Lang and Lostroh. “I particularly like the fusion of physics and biology. Looking at it across disciplines and with the perspective of different professors is more vibrant,” said Roush. He plans to get some more lab experience and then pursue a graduate degree, possibly in microbiology. 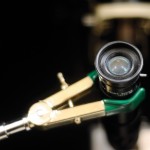 Atomic force microscopy (AFM) is a relatively new analytical technique initially used in physics research that CC professors and students are using to study bacteria. In AFM, a small pyramid-shaped probe (the AFM tip) is attached to a diving board-shaped silicon cantilever. The tip is scanned across the sample surface with the cantilever’s up and down movements measured by a laser. These measurements then render an image of the sample’s surface topography. AFM allows researchers to study features on cells at a much higher resolution than is possible with a traditional light microscope. It also provides a true three-dimensional image and the opportunity to analyze live cells, all with comparatively simple sample preparation and machine operation.

“It’s a big deal that we are involving physics students in a bio project, and vice versa,” Lostroh said, noting that in many settings researchers in such specialties wouldn’t cross paths, and exploring another discipline can initially be intimidating. She finds it “fun to see the culture clash. When I say nucleus, for example, I mean of a cell, but Kristine is talking about the dense central region of an atom.” Lostroh said biophysics is a growing field and this sort of exposure opens students’ eyes to opportunities.

Last summer, Leah Lieber ’14 worked to figure out which genes are involved in natural transformation of Acinetobacter baylii, the bacteria being studied. She presented this work at a student scientific conference in St. Louis, Mo., last fall and it’s the basis of the biology honors thesis she is presenting this spring. She thinks this sort of independent research “makes you more responsible for your own growth.”

Amber Dornbusch ’11 agrees. “It takes more self-training and you learn you have to ‘stick with it.’” The biology major worked with Lang and Lostroh when she was a senior and then for a year after graduation, eventually contributing to a paper the group published in the September 2013 Canadian Journal of Microbiology.

“The difference over other opportunities I considered is they wanted my input into the design and direction of the experiments, which taught me so much,” said Dornbusch, who is now working on her Ph.D. in immunology at the Mayo Graduate School based in Rochester, Minn. In addition to helping optimize protocols to grow “naturally competent bacteria,” Dornbusch said she enjoyed making science “more accessible to students, taking out the intimidation factor” as a mentor for the FYE class in 2012.

“I think the National Science Foundation likes that we are aware of the need to provide close mentoring for our students, particularly for disadvantaged or first-generation undergraduates,” said Lostroh, noting that she and Lang have developed their class to encourage even those who had never thought of a career in science.

“We want to help each one identify as a scientist. It’s important that we are providing a genuine experience, collecting messy, real data and analyzing it — showing what research is really like. Plus, the difficulty of the class kind of levels the playing field. It creates a culture of collaboration where they work, study, and succeed together,” Lostroh said.

Success for Lang and Lostroh means for the next four years, their research and mentoring can expand. Tess Powers, CC’s director of faculty research support, said the NSF recognition is significant, especially for an undergraduate institution. She said it is the largest such grant to CC for at least the past decade.