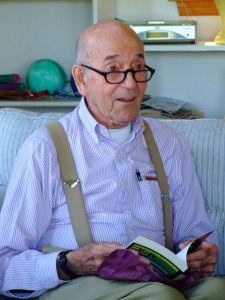 Ed Pelz at his home in Bennington, Vermont. Ed still reads voraciously, ever the inspirational student.

Arriving at Colorado College in the fall of 1934, Edward Joseph Pelz ’38 must have had no idea what lay in store for his future. Pelz arrived at a Colorado College on the upswing. The presidency of Thurston J. Davies (1934-48) had seen the college acquire new property, upgrade student housing, and hire new faculty despite the economic hardships of the time.

“I loved my time at Colorado College,” said Pelz during a call to his Bennington, Vermont, residence. A lively conversationalist at 97, Pelz waxed lyrical about the “forward-looking” college he joined when he arrived in Colorado Springs.

An economics major as well as class president at CC, Pelz graduated summa cum laude in June 1938. That previous December, Pelz had applied for the Rhodes Scholarship to study at the University of Oxford. Competing to be one of 32 U.S. finalists for the scholarship, Pelz made it to the semi-finalist stage in ’38, but didn’t make the final cut. One of the Rhodes cohorts that year was future Supreme Court justice Byron White, “a far more important man than I,” said Pelz. Undeterred by his initial faltering, Pelz reapplied for the Rhodes in the fall of 1938, and this time was chosen as one of the Rhodes Scholars for 1939.

“By the first week of September ’39, two of the recipients were already in England,” Pelz recalled. “The rest of us were due to leave by boat over the weekend, so I said goodbye to my boss on the Friday.” On Sunday, Britain declared war on Germany. On Monday, Ed “had to run back to my boss and beg for my job back!”

Fortunately, Pelz continued working at the publisher’s association in New York until July 1942 when he was called into active service with the U.S. Navy.

His start in the Navy was hindered by “my grandfather, a Prussian aristocrat, [who] had come to the U.S. when he was 20 years old.” As the U.S. was directly involved in a war effort against Germany, his family history raised some questions. “My naval commission was delayed by four months while they researched my family,” he said with a laugh.

“I spent the initial four months as a civilian intelligence officer. After that, I was shipped overseas to Europe, the Mediterranean, Suez Canal, and Persian Gulf — just to name a few.”

While stationed in England, Pelz managed to take a trip to the University of Oxford to visit the college where he would have studied, Brasenose College. “I had a wonderful visit with the college,” he said. “They still list me as an alumnus, which is just tremendous!”

After the war, about half of Pelz’s Rhodes cohorts took up the offer to study at Oxford. Pelz, having had two children during the war, declined.

Father to four children, and husband to a “genius of a wife,” Pelz returned to the U.S. to work for the New York Times as a personnel benefits coordinator. A 40-year career in the media industry followed, one that he still feels “damn lucky” to have had. One of his sons, Sanford Pelz ’75, majored in physics at CC.

Daily, Pelz remains as curious as ever. “I’m surrounded by all sorts of stuff,” he said, laughing. “I’m an old man with lots of obsessions, particularly economic ones. I still absolutely love Colorado College, and I’d do anything I can to help it out.”

Editor’s note: In the Winter 2015 issue of American Oxonian, the magazine of the Association of American Rhodes Scholars, Kathrin Day Lassila featured Ed Pelz, “the last surviving member of the Rhodes Scholar Class of 1939 and, to the best of anyone’s knowledge, the oldest American Rhodes Scholar” in her “From the Editor” column. It is thanks to her piece that we were inspired to reach out to Pelz and interview him for the Bulletin. To learn more about AARS, visit americanrhodes.org.