‘Creating a Container’: Teaching and Learning During COVID-19

Rosy Simas’ first scheduled campus performance through CC’s Department of Theatre and Dance was a go for March 2020. She packed up, got on the road, and, as Simas puts it, “from the time I left Minnesota and drove here, in that two-day timeframe, we started to enter the pandemic and that is when people started to think about restrictions.”

When she arrived in Colorado Springs, Simas, a transdisciplinary artist who historically has presented work as a choreographer, carried on. With partner and dancer Sam Aros Mitchell, she installed and performed a transitory piece in Cornerstone Arts Center on March 6, weaving together movement, film, and immersive music.

Though the year to follow would throw everyone for a loop, including Simas, her visit had made an impact. She’s back on campus for the 2021 Spring Semester, as the Department of Theatre and Dance’s first artist-in-residence, thanks to the newly established Pamela Battey Mitchell Visiting Artist-in-Residence in Contemporary Dance in honor of Hanya Holm. (See “Gift Creates New Visiting Artist Position in Dance Department”).

“It is impossible to overstate the importance of Rosy’s contributions to the Department of Theatre and Dance — and above all, our work on the antiracism initiative,” says Associate Professor of Performance Studies Ryan Platt, who also is chair of the Department of Theatre and Dance. “Rosy is a Native artist and activist who actively builds new Native audiences and combats the marginalization of Native artists,” he says. “Her teaching always involves astute attention to questions of identity, power, and cultural difference. These issues are particularly needed in dance, which many students regard as inherently neutral and a matter of technical skill.”

Platt notes that Simas also is contributing to the larger artistic and intellectual discourse on campus and that the Department of Theatre and Dance has been collaborating with the Native American Student Union, Colorado Springs Fine Arts Center at Colorado College, and faculty in anthropology, English, and race, ethnicity, and migration studies.

“These interdisciplinary connections are essential to bringing new knowledge and critical perspectives on indigeneity, colonialism, and embodiment to both our department and the larger college,” he says.

As a part of her residency this semester, Simas has been teaching and creating — and learning. 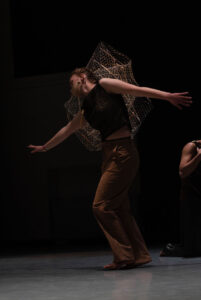 During Block 6, she taught a dance production lab class for both trained dancers and students new to the stage. In it, the students worked toward creating a culmination project of an online and socially distanced live performance. At the time, students could choose to take their classes either in-person or online, and Simas ended up working with four students in person and one virtually. The four students on campus met for class in Cutler Hall with Simas (and Mitchell, who came along again to assist). The one taking class long-distance happened to be living in Minneapolis, where Simas is from and where Rosy Simas Danse, the Native-led arts organization she founded is based, and so Simas pulled in colleagues there to offer support and provide the student with a bit of their own in-person experience.

“While we could wish that we could have more hands on to every element of the work, the multi-disciplinary aspect of it, it’s just hard to do that right now,” Simas says. “I’m basically creating a container and we’re creating performance to put within the container and the students have a lot of input into what that is and how that is executed, or, for lack of a better word, interpreted.”

“It’s challenging,” Simas adds, “but I think that it’s a challenge that is worthy of doing … . I don’t think we’re going back to all in-person anything. So whether we like it or not, we’re gonna learn from this experience. And even if we learn we don’t like it, we still have to participate in it, you know?”

Beyond learning how to make the logistics of teaching during a pandemic work, Simas also learned how the pandemic would impact the content of her class conversations. She and the students spent a lot more time talking about what it is to perform, to share, and to communicate at a time like this, as well as more about presence and how personal space has changed. For instance, she says, when considering what is an individual’s kinesphere — the notion created by dance artist and theorist Rudolf Laban to define the space around a person’s body that can be reached by extended arms and legs — how has the dimension of that gotten bigger for most people because of the pandemic?

“What is it to permeate that,” she asks, “and actually connect with audiences in a way that people have not been practicing for the last year?”

The class also talked a lot about grief.

“We [talked] about grieving and condoling and caretaking. I talk in my own work about how we’re all sort of in a state of shock. And as we exit that, we will begin to grieve, regardless of the fact that over — I don’t know what it is today — 550,000 people have died,” she says. “There will be this, I think, decade-long impact in how we do things. I mean, people have not been able to grieve, so how does that change our rituals around grieving?” 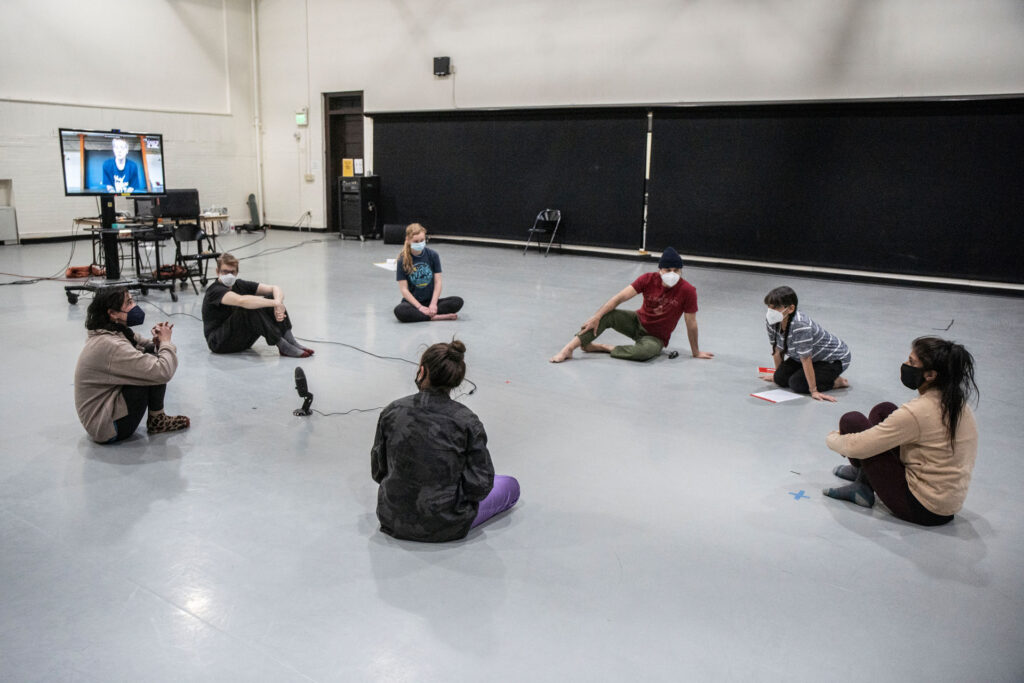 Grief is a topic long familiar to Simas’ work, which she describes as weaving themes of personal and collective identity with family, matriarchy, sovereignty, equality, and healing, through movement. “I think most of my work deals with movement in general, and by movement, I mean, either moving bodies through space, moving sound, moving objects, or moving image,” she says.

Her link to her ancestors — Simas is Haudenosaunee, enrolled Seneca, Heron Clan — is what calls her to create in the way that she does.

“My work is really very simply about attention and building relationship to the natural world, building relationship to audiences and community, and bringing attention or bringing into focus issues or philosophy or ideas that are both related to my experiences culturally. But also my work really follows a genealogy because that’s a huge part of my research. A huge part of what I’ve spent the last 10 years doing is deeply discovering a very extended, wide family.”

And, she adds, a part of that for her now “is about developing processes of grieving immense loss of my ancestors and of those of extended families.”

She explains: One of the ways Canada disenfranchised many people was to enforce a patrilineal system in which Native women who married and had children with a non-Native man lost their status. Both they and their children were deemed non-Native.

“It’s very significant,” Simas says. “Those are part of the losses that we both mourn and also try to investigate to understand more what it is that our families have historically gone through.”

It’s a process that takes many shapes. Which is why when Simas describes her work as an artist as transdisciplinary versus multidisciplinary, it makes sense.

“Multidisciplinary is, to me, bringing different disciplines together to create a whole, and transdisciplinary is working in different forms and with different materials and using different processes that the project requires, listening to what is needed,” she says. “I could end up doing a project that doesn’t have any dance in it at all, if that’s what the project requires. And I have done that, I have done just installations.”

“Being in the messiness of not always knowing,” she says, “and working in a transdisciplinary way is more conducive for that for me.”