Professor Emeritus of Political Science Bob Loevy published this article in The Gazette about his former student, Liz Cheney ’88, in early May.

One of the rewards of teaching, from preschool through graduate school, is to have your former students succeed in life in a dramatic and well-publicized way. It is always a great feeling when a former pupil is elected mayor of the town or wins a seat in the U.S. House of Representatives. 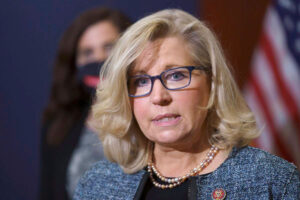 These past two weeks have been big ones for this college professor. A former student of mine, Liz Cheney, Colorado College Class of 1988, was elected in 2016 to be Wyoming’s one member of the U.S. House of Representatives.

Now she is a major participant in one of the biggest national news stories playing in the press, on television, and on the internet. The United States public is gripped by the story of Liz Cheney voting to impeach her political party’s former president, Donald Trump, for inciting the mob attack on the U.S. Capitol building on Jan. 6.

But she has gone further, repeatedly accusing Trump of lying to the American people in his claims that the 2020 presidential election was stolen from him by widespread voter fraud. Cheney has characterized Trump’s voter fraud charges as the “Big Lie.”

Liz Cheney arrived at Colorado College in the fall of 1984. Her family was already connected to the college through her mother, Lynne Cheney, who graduated from the college in 1963. Lynne Cheney gained a measure of national notoriety as head of the National Endowment for the Humanities and the author of a major biography of President James Madison.

Liz Cheney’s father, Dick, was a well-known figure in the Republican Party at that time. He had served as chief of staff to Republican President Gerald Ford. Then he went back to his home state of Wyoming to run for that state’s lone seat in the U.S. House of Representatives.

He was the representative from Wyoming the entire time that Liz, the oldest of his and Lynne Cheney’s two daughters, attended Colorado College.

It didn’t take long for Liz’s political future to become evident at Colorado College. She started taking political science courses, including an introductory American Government course taught by me.

She nicely arranged for her father to spend an entire morning with my class discussing his political experiences — at the White House and elsewhere — and elaborating on issues then facing the U.S. Congress. He concluded his visit with tips on how to get elected, exhorting the students to “build your list” of supporters and campaign contributors.

About this time, I had a conversation with Liz Cheney about her plans after graduation. She spoke matter-of-factly on the subject. “I’m watching the population growth in Wyoming,” she said. “Some time in the future, Wyoming should have enough residents to qualify for a second member of the U.S. House. That would be a good time for me to run, as that will be an open seat, and I will not have to challenge an incumbent, who would probably be a Republican.”

You do not often hear talk like that from an undergraduate.

As it turned out, Wyoming’s population did not merit a second member of the U.S. House of Representatives. Liz Cheney, however, was elected to the one seat.

Liz Cheney continued her political science studies at Colorado College. She wrote a senior thesis entitled “The Evolution of Presidential War Powers.” It revealed her strong support for presidents who pursue a vigorous and involved U.S. foreign policy.

She earned a law degree from the University of Chicago. Along the way she married, and gave birth to five children.

She had a wide background of governmental and legal experience when elected to the House of Representatives in 2016, the same year that Donald Trump was elected president.

She kept in touch with Colorado College. She participated in a major intellectual symposium at the college at the time of the 2008 presidential election. She has made many classroom visits to political science courses.

I recognize that the Liz Cheney vs. Donald Trump fracas has divided the Republican Party, and that polls show many Americans siding with the former president in his charges of widespread voter fraud

I am impressed, however, that the U.S. Justice Department and an array of state and U.S. courts have denied or dismissed the many charges of voter fraud filed by Trump supporters. I therefore agree with Liz Cheney that even a president of the United States should be challenged and criticized strongly when he lies to the American people.

If a liberal arts college education does anything, it should inculcate in students the ability to discern the truth and then speak honestly about it. Liz Cheney has done both.

Bob Loevy taught political science at Colorado College from 1968 to 2014.

This article originally appeared in The Gazette on May 11, 2021, and is reprinted with The Gazette’s permission.