The detrimental effects of climate change are not only destroying the planet, but causing grief.

Ecological grief– eco grief– happens when you feel emotionally affected by the changes in the environment.

A group of people so gripped with woe about environmental change formed a commune. They called it Zendik farm. “Anger at society for not doing anything about the dying earth was what made them do what they did all those years,” said Thea Atkins, a student at Bennington who was born on the farm and raised there for the first 3 years of her life.

Her parents lived on the commune for 17 years. They left home to live and work on an environmentally aware commune because of the deep sadness they felt about the warming planet. Now, after leaving the commune, the family owns a gardening company in the suburbs of Chicago where they first hand see the effects of climate change during growing season. Eco Grief has been a large part of her family’s lives.

Zendik farm was a seemingly positive place, practicing sustainability in every aspect. Over time, it was clear that Zendik was a cult. The leaders of the commune made it difficult to get in touch with the outside world and limited Jeane, Thea’s mom, from seeing her daughter. Nonetheless, The existential distress and overwhelming frustrations with the diminishing world and how society was reacting to it pushed Thea’s family to stay at the farm.

Eventually the issues on commune were worse than the emotional distress about the planet and Thea’s family returned to the suburbs of Chicago. There, her mom, dad and step dad (all members of Zendik) started an organic gardening company.

The ecological grief has not gone away.

They see the effects of climate change everyday. “This summer was super wet and spring lasted a really long time so tomatoes peppers cucumbers, basically everything besides herbs and leafy greens, did pretty bad,” said Thea.

“Overall the weather is just so different each season that it’s really hard to predict. Certain types of birch trees can’t even grow in our area anymore!”. These changes from season to season have made global warming very real for the Atkins. Thea’s whole family feels a heavy guilt about driving cars and creating waste.

Being back in mainstream society, instead of on the commune, gives little option to live truly environmentally friendly. 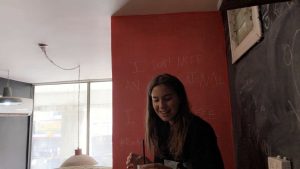