“Our home needs our care,” the sign says, showing a blue-green planet earth.

But farmers facing dwindling water from mountain snowpack and falling water levels in underground aquifers say they are hard-pressed to get by under increasingly difficult conditions.

A long-term shift to aridity threatens to force nearly 100,000 acres of irrigated land out of production.

If current trends don’t change the valley will run dry and agriculture will no longer be a viable industry, Simpson said.

“I can’t imagine it, but there might be a moment when some of us say ‘This isn’t worth the fight anymore,’” he said,  shaking his head.

Government programs provide some incentives to encourage less water usage, including an initiative called the Conservation Reserve Enhancement Program (CREP) that offers to pay farmers to leave plots of land empty and unirrigated.

Farmers have organized subdistricts and imposed fees on pumping groundwater as a way to try to restore balance.

Many farmers here are third or fourth generation agriculturalists. Some are hesitant to change their ways.

If it worked for their father, and their grandfather before, why shouldn’t they be able to do the same? The valley’s CREP program has struggled to find participants because it requires that land be left untouched for up to fifteen years, Simpson said. 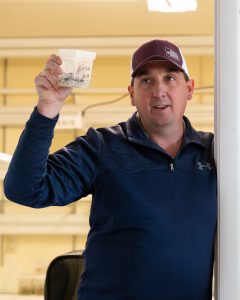 Rockey and his potato sprouts

“They want to farm, they don’t want a set-aside program,” said Sheldon Rockey, who runs Rockey Farms with his brother Brendon.

The farm was founded by their grandfather in 1938 and has made significant changes over the years. They switched from water-guzzling alfalfa rotations to more sustainable cover crops, and have since become leaders in sustainable farming in the region. But their primary focus, potatoes, hasn’t changed since the farm started, despite the amount of water required to produce them relative to other crops.

Rockey remains optimistic in the face of the environmental changes in the valley, which he believes are caused by natural weather fluctuations. He is confident that the farm will still be around in thirty years, and he hopes that his daughters will take over the operation when he retires.

But what if water available for farming continues to decline, reaching a point when he can no longer farm?

“I don’t even think about that,” he said.

Essah is pushing those he works with to implement potential solutions to water challenges, such as longer crop rotations.

But some in the valley are skeptical of the causes behind their water concerns and are reluctant to change how they farm. 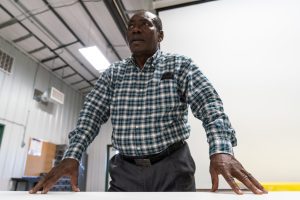 Leaving plots occupied by low or no profit cover crops means less income, even though science says that it would pay off in the long run. “He wants his money now,” Essah said, not several years down the line. “They focus more on economics than they do the environment. The bottom line is the dollar.”

Essah is confident in the programs established by the Rio Grande Water Conservation District and other local agencies.

Others in the community aren’t so sure. Accomplished grassroots activist Christine Canaly has fought for public lands and sustainable resource management since she moved to the San Luis Valley in 1988. Along the way, she has seen firsthand how the valley has changed.

“We don’t necessarily get our monsoon seasons anymore,” she said.

Shifting rain patterns is a significant source of uncertainty for farmers and ranchers, says Canaly, adding to water and crop disease concerns.

“The thing that farmers need more than anything is consistency, and they don’t have it with the weather,” she said. “I think they’re under a lot more pressure.”

For many farmers, the uncertainty of changing climate and industry manifests itself as resistance to change. The practices inherited from their parents and grandparents are a source of stability in a valley buzzing with conversation about new technology and hostile weather.

“There is no control. But we can be very good managers, and that’s what’s missing right now,” Canaly said. And to be good managers, of the land and the water, farmers will need to adapt their practices.