To farmers in Colorado’s San Luis Valley, potato farming is more than a way to sustain their lives, it is their way of life. But as a growing water crisis tightens its grasp around the valley, workers in the agriculture industry wrestle with how to stop the draining of their aquifers while maintaining their beloved lifestyle.

The region’s recent water trends paint a grim picture for the valley’s future. According to the general manager of the Rio Grande Water Conservation District Cleave Simpson, data from Del Norte, which serves as a crucial measuring point for aquifer storage in the valley, have shown a rapid decline in water table levels since Colorado’s severe drought in 2002.

“People tell me all I’m doing is rearranging the deck chairs on the Titanic,” Simpson said.

He described the basin as “highly over-appropriated,” explaining how there are currently 14,146 decrees for wells within the basin, with many people who own water rights never actually seeing a drop of water. Short of this year, well owners were never curtailed in their water usage.

To combat this growing threat to the San Luis Valley’s most vital industry, public officials, researchers, and farmers have been focusing on how they can reduce water usage on farms.

In an interview at Rockey Farms in Center, Colorado, Sheldon Rockey said that he and his brother Brendon have been pioneers in the valley for their use of green manure. This consists of a mixture of seeds that are tended and then tilled back into the soil to add nutrients, limit weed growth, and prevent erosion.

While reducing the amount of income earned from potatoes to cultivate green manure may be intimidating to farmers, Sheldon Rockey maintained that this crop-rotation process is more profitable because it cuts “water usage in half” and eliminates the need for fertilizers. 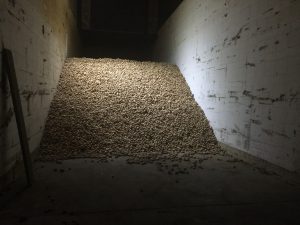 Another way to reduce potato farmers’ water usage is explored by Samuel Essah, a Ghanaian scientist working for a research field station in the valley run by Colorado State University. His work involves the research of naturally grown potatoes that “maximize the efficiency of water use,” he said. Essah has been experimenting with a wide variety of water-friendly potatoes, the purple majesty potatoes declared as his preferred type to munch on.

But not all farmers are keen on shifting their long-serving farming methods. According to Sheldon Rockey, many successful farmers whose wells haven’t yet been affected see no reason to change and are pumping the same amount they always have.

Essah matched this sentiment, saying that “the bottom line is the dollar” for many people both in the valley and around the world. He pointed to farmers’ “fear of the unknown” to explain the lack of enrollment in the region’s Conservation Reserve Enhancement Program (CREP).

Yet Essah also expressed a belief that conservative farmers will overcome this fear and eventually adopt these water-saving systems once they see their success.

Many in the valley share this striking optimism that farmers will be able to persevere through these hardships. “Though there’s uncertainty,” Essah said, “they still have hope.”

To Rockey, farming is in his family’s blood and he is unwilling to throw in the towel and move onto other ways to survive, such as selling his water.

“We’re gonna be farming in 30 years,” he said. Rockey is convinced that his two daughters will be drawn to the farm as he and many other farm-raised people in the valley have.

“Our plan is to be there for them to be able to continue on,” he said.

Public officials also reflected the pride and endurance of the potato farmers.

“Agriculture is what keeps us alive and agriculture isn’t terribly profitable here,” said Simpson, ”But it’s just what we do.”