SAN LUIS VALLEY—Sitting by the fireplace on a frigid afternoon in Crestone, activist Christine Canaly talked about the impacts of climate change.

Canaly founded the San Luis Valley Ecosystem Council, and has worked for more than three decades trying to protect water resources and thousands of acres of public land.

She is in tune with the natural environment, from wind patterns to shifting vegetation. She said the uncertainty brought on by a changing climate affects not only this physical landscape but also the human mental frontier.

Meditation may help, Canaly said, referring to a culture emphasizing spirituality in Crestone.

“There are probably half a dozen meditation groups that really bring people in,” Canaly said.

“People are looking for any way to calm their minds.”

She estimated in a recent interview that Crestone draws more than 20,000 visitors a year to its various spiritual centers, aligned with major religions and mindfulness groups.

People come to the valley to meditate because they find peace in the open landscape, a break from dense, business-oriented big cities. The emptiness of the valley seems to favor a deeper connection with the natural environment.

“Our ancestral land goes way back,” said Bryan Vigil, 68, a tribal elder who lives in Dulce in northern New Mexico. He stood with Lorene Willis, another member of the Jicarilla Apache tribe, conversing with Colorado College students recently at the base of the sand dunes.

Jicarilla Apache people lived around the Sangre De Cristo mountains and used the dunes as a training ground to strengthen their horses and young men before hunting buffalo, Vigil said.

He discussed the importance of staying connected to the natural world – just as his elders instructed him as a boy.

“We were told stay in contact with everything, with the earth,” he said. “Pray barefooted, or wear moccasins, because that rubber insulates you from the earth,” Vigil said, facing the CC students. 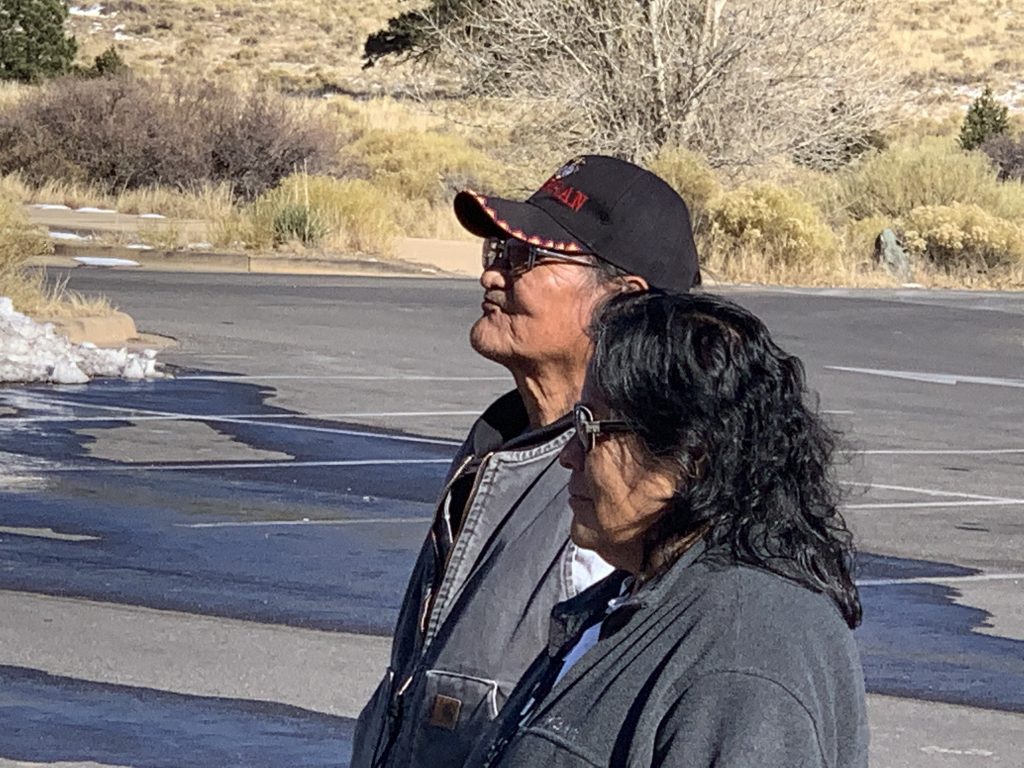 “You don’t have enough connection,” he said.

Apaches worry about the future now, with natural systems out of balance due to greenhouse gas emissions. Vigil and Willis reviewed ancestral tribal prophecies and told students they are coming true.

“When the white cedars dry up as far as you can see, you’re gonna carry your belongings on your back,” Vigil said.

Willis, too, has found that predictions made by her elders are coming to fruition.

“They told us back then that water was gonna be precious, they would bring it in bottles and you’d pay a lot of money for it,” she said. “It just seemed so ridiculous to think that water would be so precious that you had to pay for it.”

As Willis looks to the future, she tries to stay positive. She remembers more optimistic prophecies, foreseeing a time of peace and unity.

“All these people are gonna come together all around the world and when that happens there is gonna be peace on this planet for many many years,” she said.

“There could be some hard times coming, but when that day when we make peace with all the people, even that grass is gonna push itself up from the earth so that it could be a part of that day.”

Addressing the twelve young journalists at the base of the dunes, Willis called for a restoration of balance between humans and the natural environment.

“It’s up to you young people. You are the future now.”