Although a bit hesitant when first hearing that we were going to have a Chinese Seafood Banquet for our class celebration dinner, I am happy to say that it was one of the best meals we have had so far in LA.  Yes, I know this is not a food blog but I feel the need to give a little shout out to New Bay Seafood in the San Gabriel Valley.  Sitting around a large round table with seven of my fellow classmates, we were strategically guided through the menu by a Chinese woman who was eager to share her personal favorites and give us the best dining experience possible.  I have to say, when waiters/waitresses are visibly excited by the food they offer, it creates a whole new level of excitement for the “diners” themselves.  After ordering about seven dishes (sorry Clay & Dylan) we quickly realized that our eyes were bigger than our stomachs.  The first course to arrive was a Lobster.  I do not know exactly how big this lobster was but almost 2 times the size of my head… And I have a big head.  After the steak, noodles, rice, green beens, broccolini, calamari,  chicken, and soup made their way to us, we were stuffed but convinced into ordering dessert (creme brûlée).  Aside from the hilarious conversation and delicious food, a highlight of the night was definitely when two chefs brought a live King Crab into the restaurant– a vision that might haunt me for the next few months. 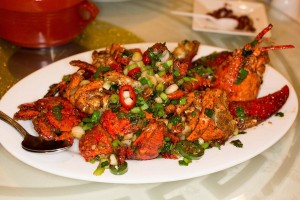 Yesterday, we made our way to a German Korean beer garden where we met with documentary producer Melissa Robledo.  One thing I admired was when Robledo emphasized the importance of helping to teach someone when they are either interning or working for her.  I found that really admirable as many of my own, and my friends’, internship experiences have largely been constituted by a series of menial endless tasks and minimal opportunities to enhance your personal skills.

Lastly, we were invited to the house of Jill Mazursky, a CC alum who had just returned from Coachella.  After a delicious dinner of enchiladas and salad, we all sat down to watch Keep On Keepin’ On, a documentary she executive produced.  What I personally found interesting about this documentary was that it took about twenty minutes for me to see how every person and individual story was interconnected.  This sort of delayed connectivity gave an additional excitement and surprise to the film itself.  Secondly, it focused on a topic and one of its “founding fathers”  I had minimal knowledge about – Clark Terry and JAZZ!  The story was a truly  inspiring one and showcased a connection between two people that was unique.  I think a lot of young adults tend to write off older people as being able to genuinely affect their lives in any real way.  The relationship between Terry and Justin, however, was a mutually beneficial friendship that was alive and seemingly unbreakable.  In a side-note, Jill was one of the nicest and down-to-earth people we have met thus far on our trip.  She was interested in why each one of us was personally attracted to film and happy to chat with us and give us advice on projects and future plans. She even offered to look at people’s work.  Hopefully, she won’t be bombarded with too many Vimeo links…ha. 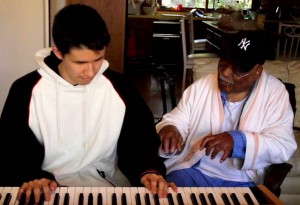 All in All– a great last 2 days to end our block.