– Just got back from a fantastic block break in the Maroon Bells in Aspen, CO! 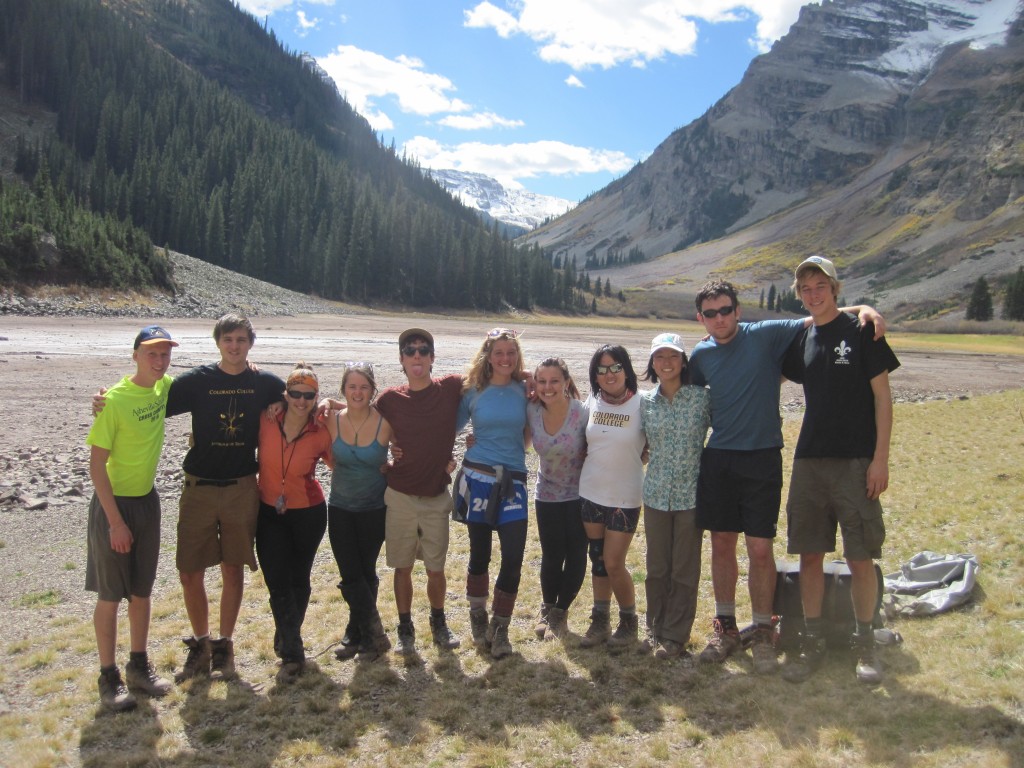 My backpacking buds and I by Crater Lake in Aspen, Colorado.

During the fourth and final week [well, really more half of a week] of the block we finished talking about the mining industry in Colorado. We had a great discussion about the relationship between economy, the environment and culture. Everyone had points to talk about, using the Environmental History book,Killing for Coal,by Karl Jacoby, that we read as evidence for our arguments.

An easy example of the kind of cyclical relationships between people, progress and resources in history that we analyzed is that of coal and the railroads. We explored how coal lead to the development and evolution of trains, which not only allowed for a kind of ease of travel that had never been seen before leading to immigration to the west, but also larger impacts like the invention of  continental time zones. This drastic change in transportation lead to marked changes in the overall national mentality revolving around travel; tourism was made possible, international communities were no longer worlds away and the ease of travel lead to a sense of rootlessness and restlessness among settlers. Circling back to the initial impetus for this kind of change was coal itself, which, in turn, was needed in ever-growing amounts to feed these shifts in national consciousness.

The last day of the block we had a take home mid-term exam. It consisted of two short essay questions and one longer one, challenging us to not only review the course material we learned over the course of the block, but also to apply some of the analytical skills we acquired.

Once the last exam was turned in Wednesday afternoon, it was block break! Many opted to stay and relax on campus, some went home or to a friend’s house, others went backpacking or camping in the Colorado Rockies!

I was one of the people who choose to go backpacking. I was one of the luck freshmen who got onto something called a “Foote Trip,” which is a free backpacking/ camping/ climbing etc… trip for freshmen! Lead by three upperclassmen, I had a blast getting to know some of my fellow classmates and exploring the beautiful mountains of Aspen!

We got to see pikas and marmots while traveling through the beautiful alpine environment. I know that I loved every moment, from summiting a 12,000 foot pass that gave us a 360 degree view of the surrounding mountains, to laughing around a well cooked meal at camp. We got out of the backcountry a day early and the leaders listened to my suggestion to go to Leadville, Colorado, a historic mining town! The highest city in the US, Leadville afforded us the opportunity to buy non-camping-stove-cooked treats at the local coffee shop City on a Hill Coffee, as well as a lengthy history lesson from yours truly.

After Leadville we headed down to the Mount. Princeton Hot Springs in Buena Vista where we enjoyed a relaxing evening in the natural springs at the base of the Collegete Mountains. It was a great trip and I look forward to going on many more, and perhaps leading a few myself in the future…

Tomorrow is the first day of Block Two, and the day after we, as a class, are headed to New Mexico until Friday! I cannot wait to spend time on the road with my class, visit monuments, museums and other historical sites and learn about this fascinating part of the country!