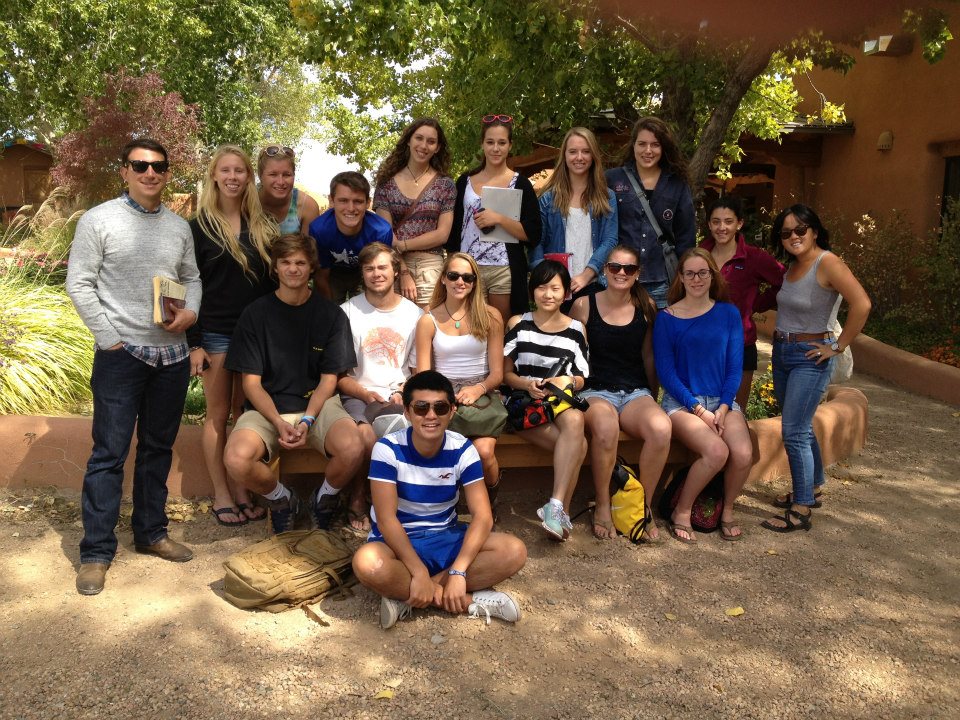 The whole class at the El Rancho de las Golondrinas

So I’m here sitting in at Starbucks in Fort Collins, CO, still in slight disbelief that the first week of the block is already over.

On Monday, after block break, we met as a class to get back our research papers and midterms, talk about the itinerary for our upcoming field trip and to discuss some new terms and learn a little bit about the history of New Mexico. Santiago let us out early that day so we could go to something called “First Monday,” which is a presentation, performance, lecture, or movie etc… shown for the entire school the first day back from block break. This First Monday was a dramatic reading of excerpts for Idris Goodwin’s, a visiting professor, play, “How We Got On.” It was a great performance and I look forward to many more “First Mondays” to come…

The next day, all packed and ready to go, we left CC to Taos Pueblo, New Mexico! The five-hour car ride flew past as many of us read “Land of Disenchantment” By Michael L. Trujillo, a critical ethnography examining New Mexico’s romanticized and commodified image of a perfectly blended mix of races and cultures, or caught up on sleep from our block break adventures. 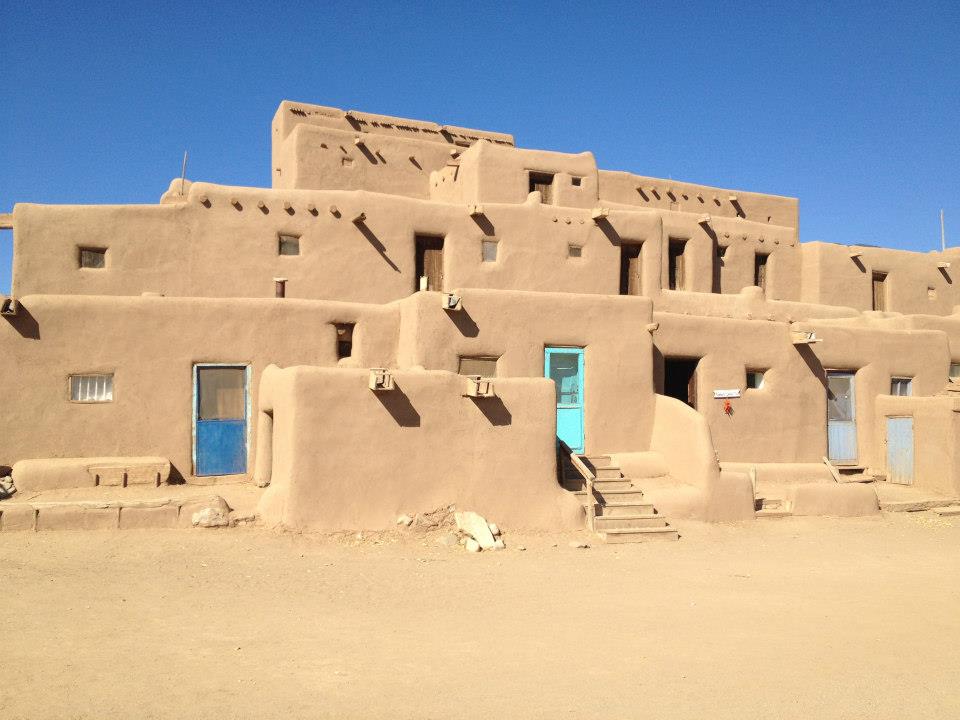 An ancient adobe structure at the Taos Pueblo Indian Reservation

After lunch we went on a brief tour of the reservation, receiving a history of reservation itself but as well as that of the Taos Pueblo people. Our tour guide, a Native American herself, not only gave us  an informative tour, but also a unique personal insight into daily life, traditions and a cultural identity that we might not have been able to gauge on our own. After the tour we had time to wander around the reservation, take notes and buy things from the numerous shops and vendors. As I shopped around and took photos for this blog, I wondered what it was like living here, having tourists wander through your homes… 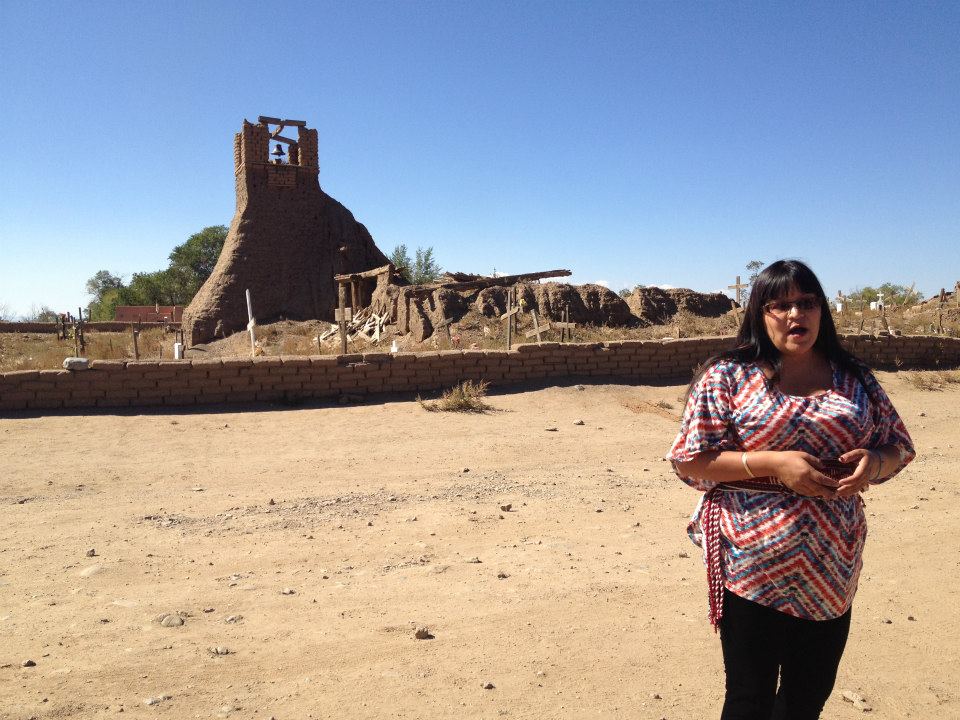 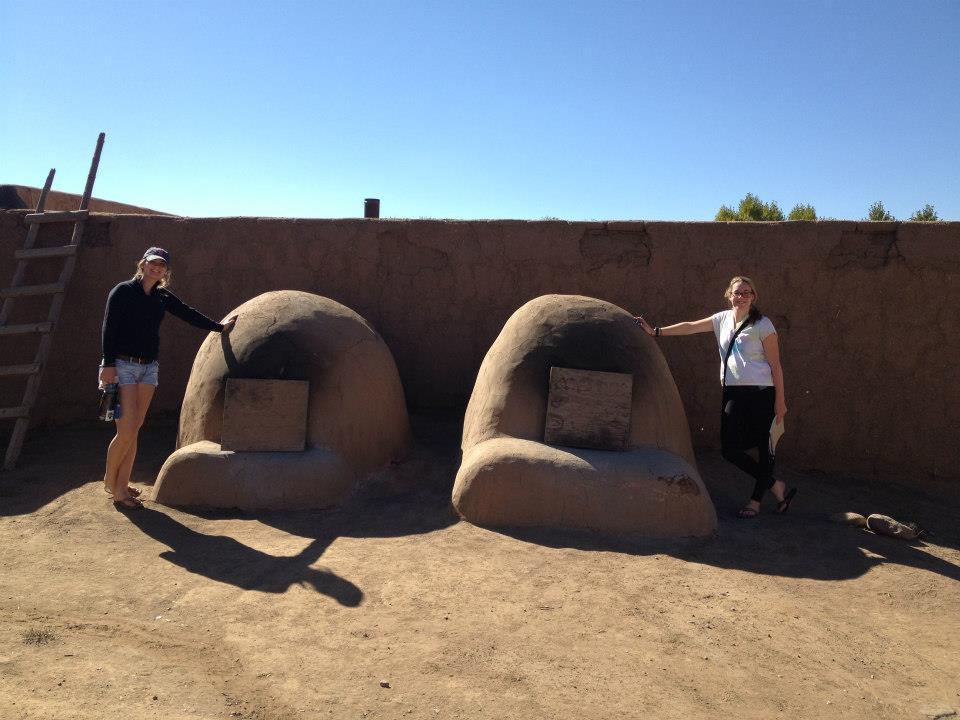 Two of my classmates by traditional Pueblo ovens

For the rest of the afternoon we were able to explore downtown Taos on our own. Although some stayed behind to do homework, nap or go for a run, most walked the few blocks down from our motel, relishing the freedom to explore such a new and interesting part of the country. We regrouped at the hotel a few hours later and headed out to a delicious Mexican meal. That night, many of us went to the hotel’s pool and hot tub to round out a great evening. 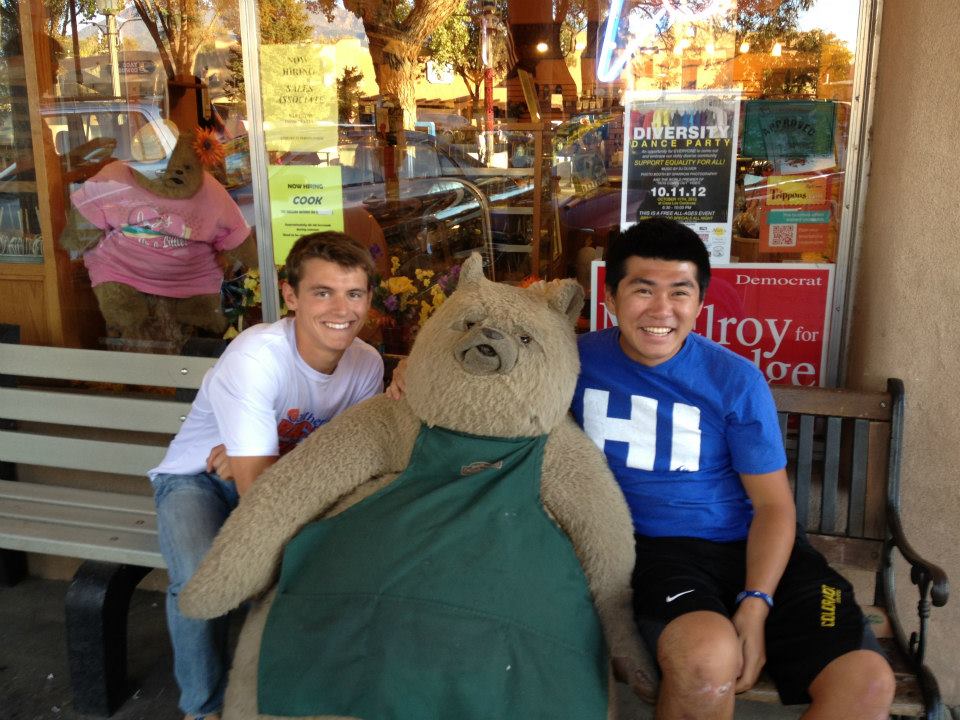 Making new friends outside a chocolate shop in downtown Taos.

The next day, after eating breakfast at the hotel we drove to the Alcalde Elementary School, or what used to be the Onate Monument National Visitor center. We read a lot in the book “Land of Disenchantment,” about this statue and the controversy surrounding it, but being able to see it in its proper setting was a valuable experience. 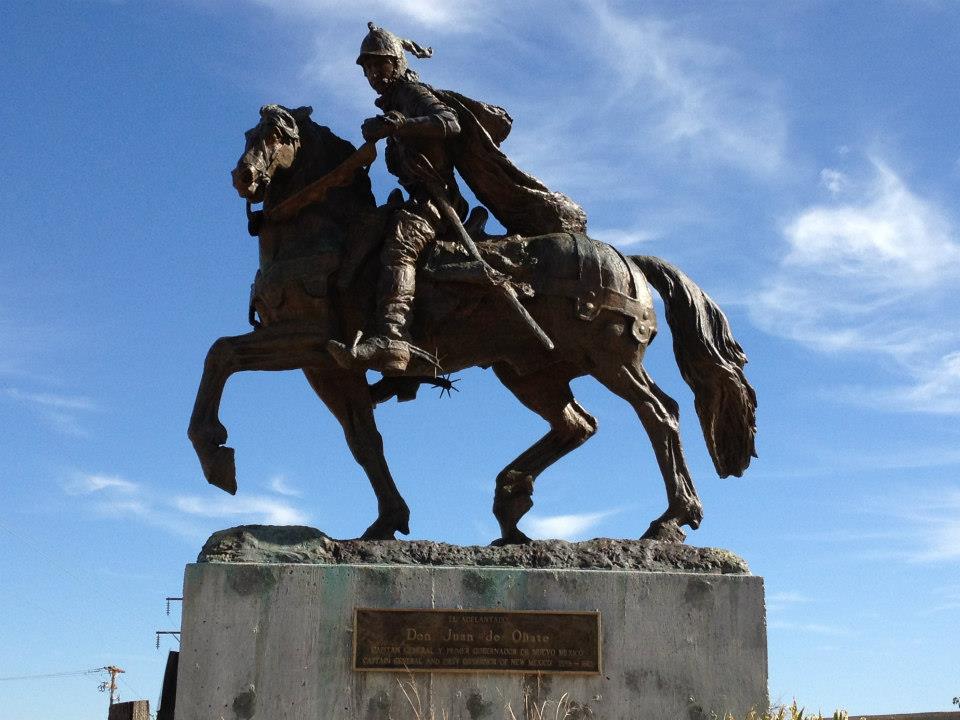 We then drove to El Santuario de Chimayo, a Catholic church and pilgrimage site. There was no tour guide, so we explored the beautiful grounds by ourselves, admiring the statues, buildings etc… as well as its surrounding, wonderful natural landscape. A few of us sat in on daily Mass that was occurring at the time, while others choose to explore the grounds and sit outside in this peaceful place. Although I am not a religious person, I loved my visit there, for not only the historical and cultural value of the Santuario, but the tranquility and restorative calm I found there as well. 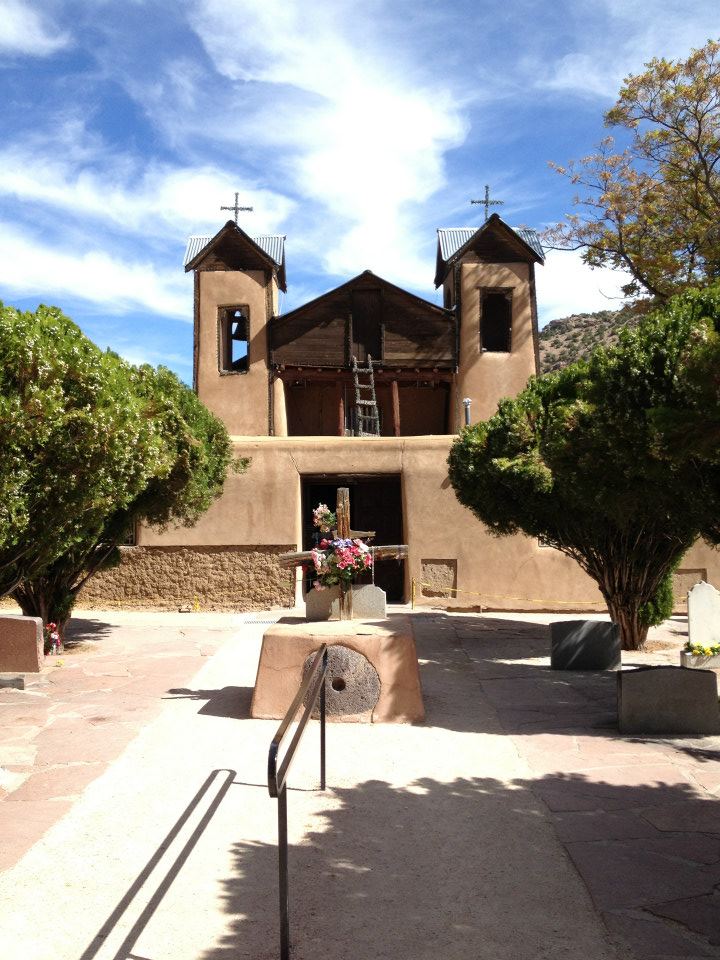 The exterior of the Church 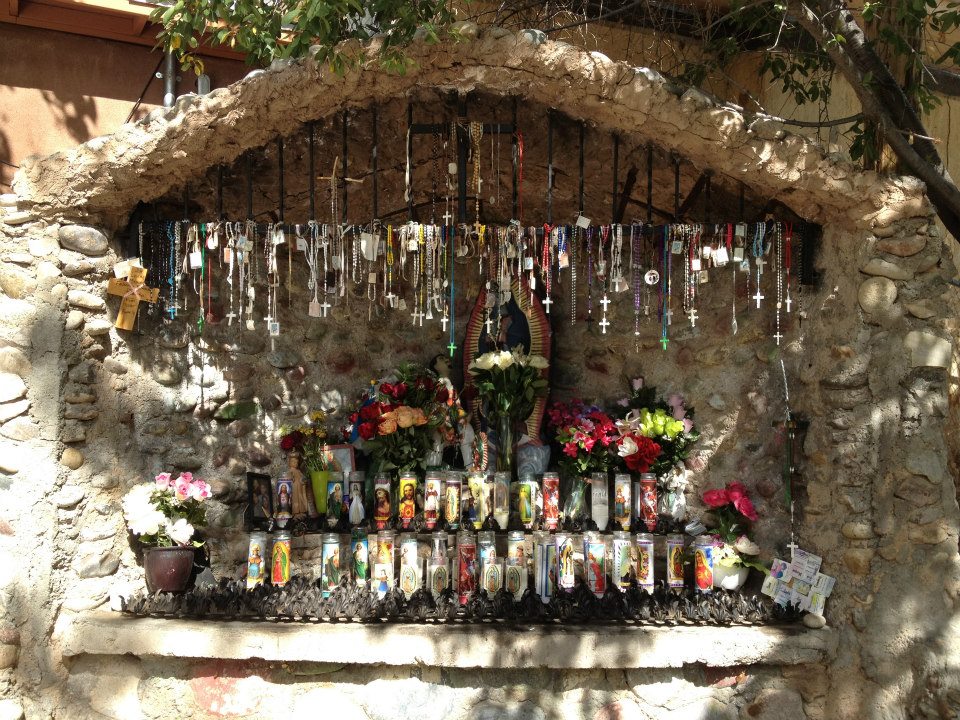 One of the numerous shrines at the Santuario 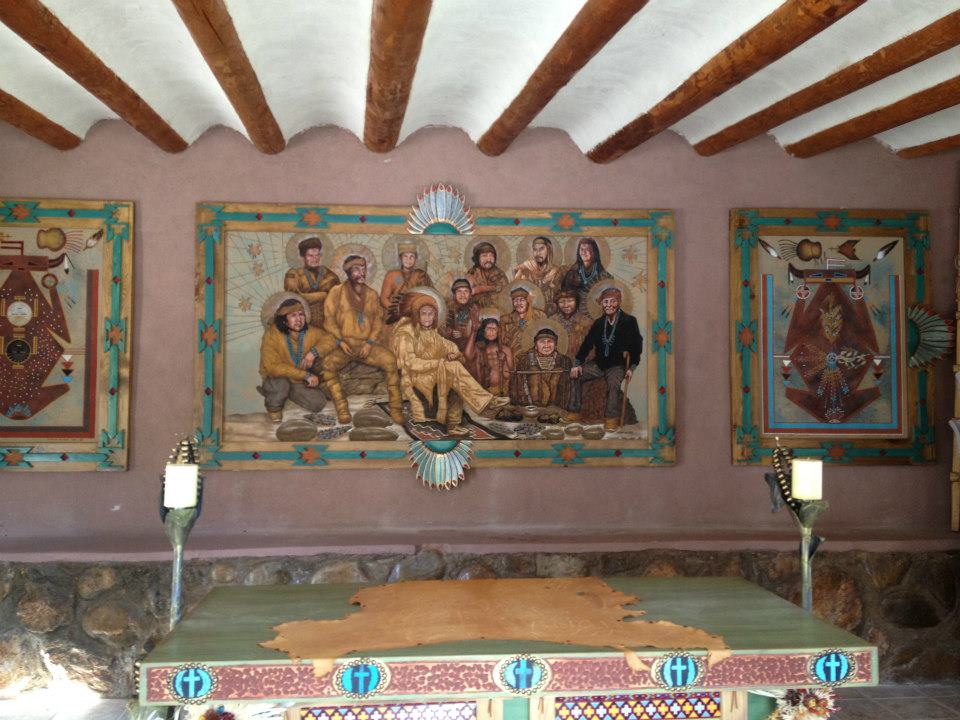 An example of cultural and religious mixing, found at the Santuario

Next, we stopped for yet another Mexican meal on our way to Santa Fe! We arrived in there in the late afternoon and after dropping our bags off in our rooms, Santiago lead us to the downtown where we had another afternoon of shopping, exploring, eating and relaxing. I know that I enjoyed reading by book in the Starbucks, watching the hustle and bustle of tourists, locals, vendors etc… mill past the window in this beautiful city. After a pizza dinner, a break from Mexican food, many of us watched the Presidential debate on TV.

The next morning we rose a little earlier than usual, for we had a full day a head of us! After a quick breakfast at the hotel, we drove to a “Living History Museum,” called El Rancho de las Golondrinas. We got a great tour of this 18th century ranch and farm, which gave us first hand, tangible knowledge and experience to apply to all of the texts we read and lectures we had listened to. 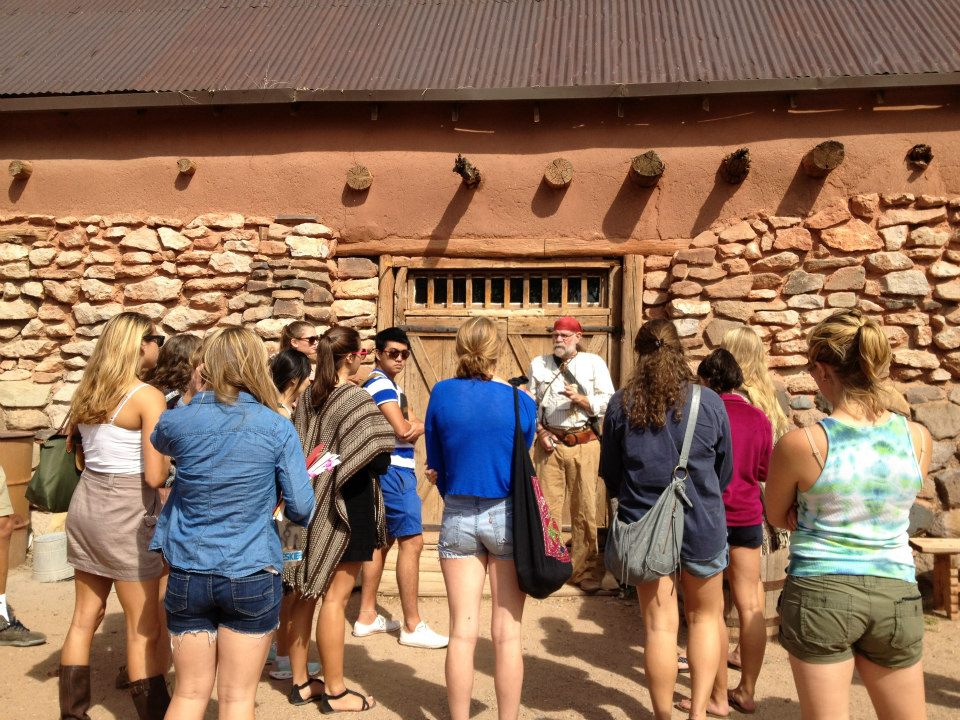 Our tour guide, a gregarious man decked out in ranching accessories was informative and enthusiastic about teaching us about this fantastic place. He possessed vast amounts of knowledge about both the history of the ranch itself and of the history of the Spanish and Mexicans in New Mexico in the 1600-1800’s. 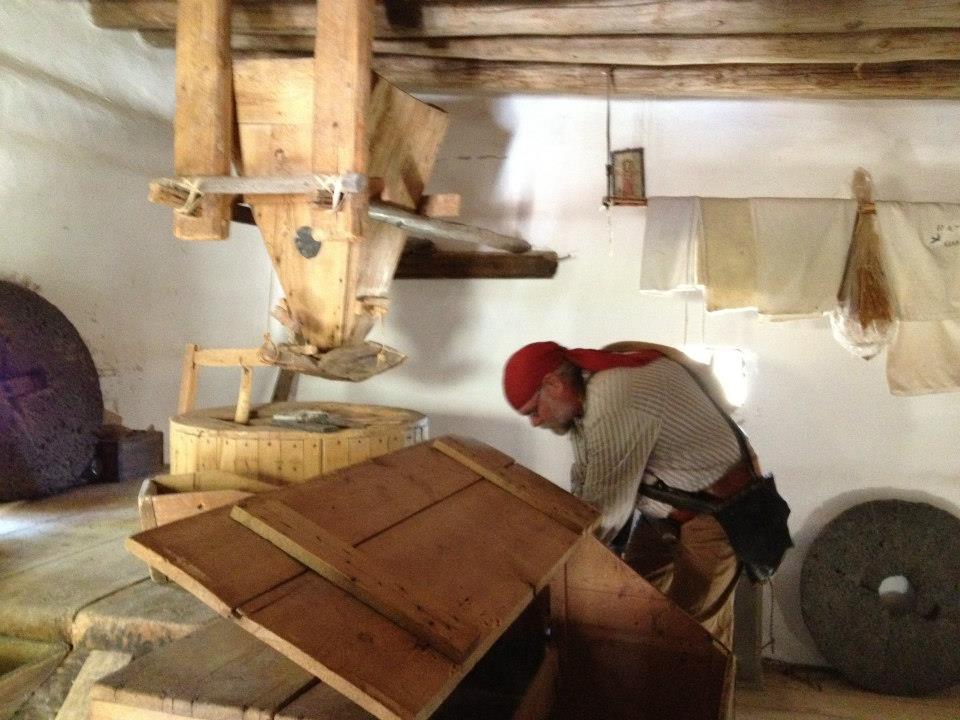 As “head miller,” as well as tour guide, he was happy to show us how a colonial Spanish mill worked 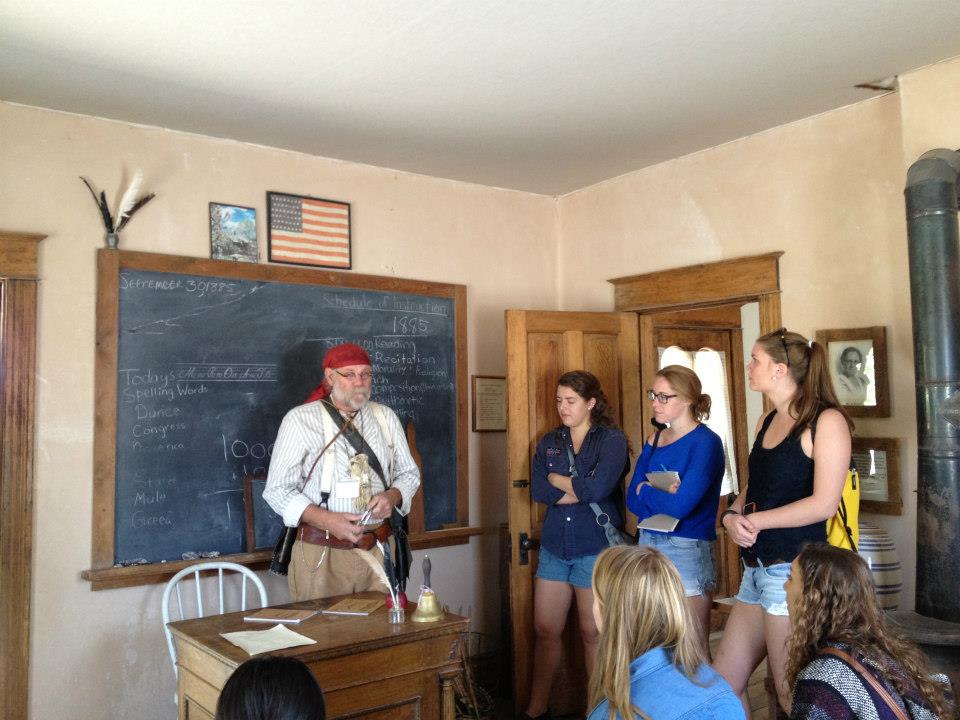 After the tour, we went out to eat on the way back to Santa Fe. We drove back to the hotel from the restaurant to walk downtown as a class and visit the New Mexico History Museum. This beautiful and informative place rounded out our trip to New Mexico through comprehensive and interesting exhibits. We walked around the museum on our  own, so we could view the hundreds of artifacts and plaques at our own pace. 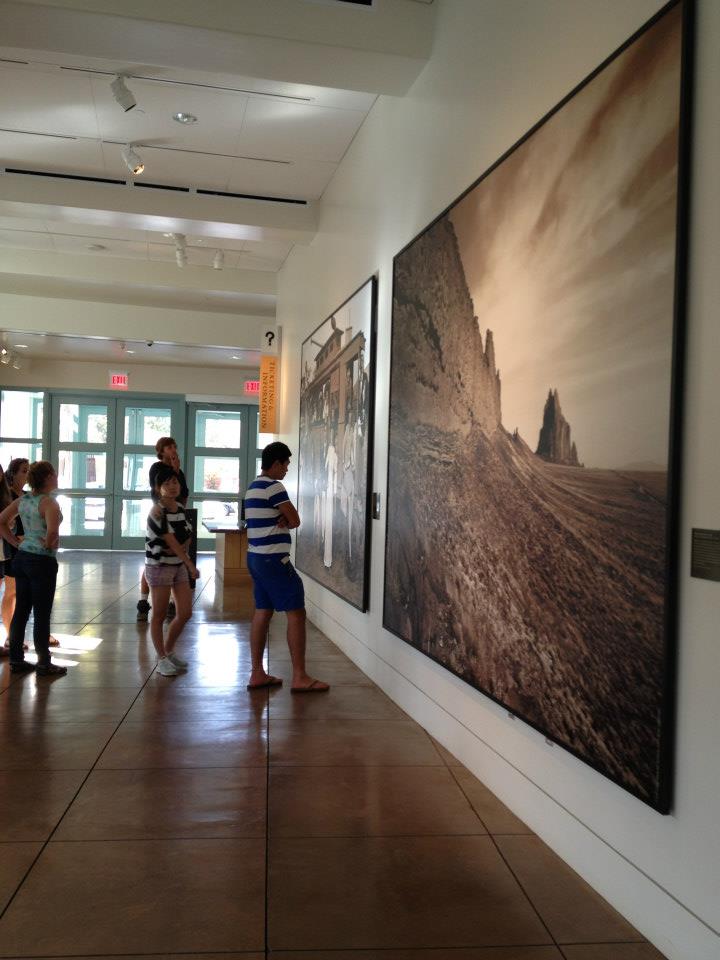 Some classmates looking at the display in the lobby

Once we were finished, Santiago instructed us to visit the Cathedral Basilica of St. Francis of Assisi. Like our walking tour of downtown Colorado Springs, we were supposed pay close attention to the numerous statues outside as well as the interior of the Basilica. 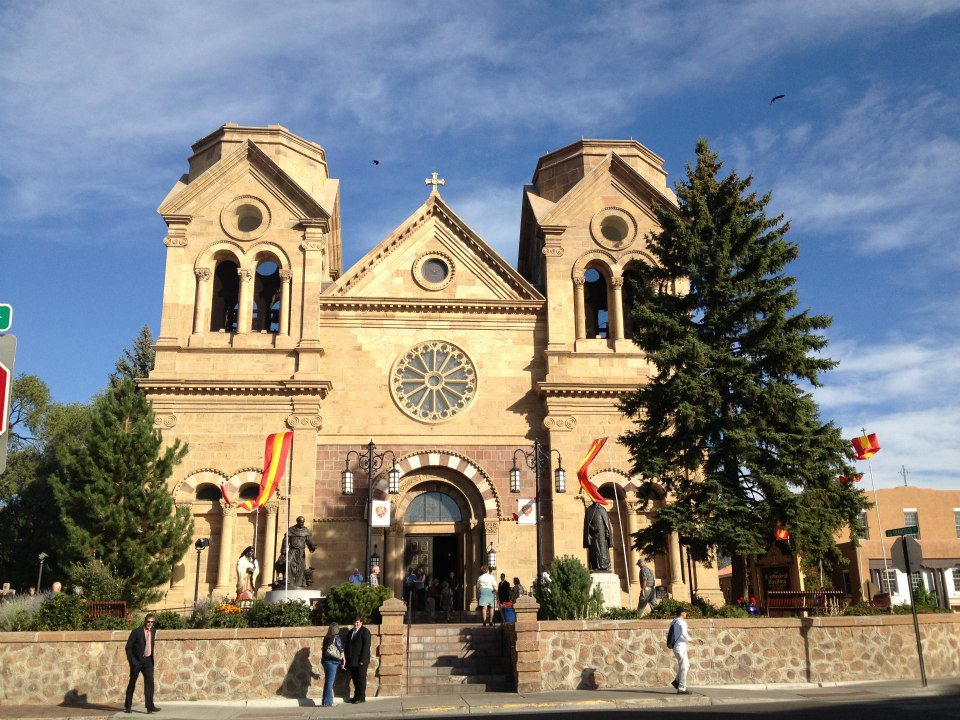 Across the street from the Cathedral Basilica of St. Francis of Assisi.

Once we were done with these two sites in Santa Fe, we were free to once again walk around downtown at our leisure. Many of us, having ran out of time yesterday continued to go in and out of shops and look at Native American vendors outside the New Mexican History Museum. Others returned to the hotel to rest after an eventful day. That night we went out to more Mexican food, celebrating the end to a great field trip.

We woke up the next day and with our packed bags, loaded straight into the bus to go to brunch on the way back to CC. Most of us slept on the long ride back to Colorado. When we returned we were greeted by cold flurries of snow! Quite a change of pace from the hot desert we had just spent a week in! I went on, not even a half an hour back from school, to visit some friends in Ft. Collins, two hours north of Colorado Springs, but I half wish I was back at CC to see the snow on Pikes Peak and to work on our reflection of the field trip due Monday.

Next week is Homecoming/ Alumni week along with an open house for perspective students as well as parents weekend! This is not even including the first draft of our final research paper that is due at the end of the week. Its going to be a crazy few days, but I can’t wait for it to start!

For an album of all the field trip photos I’ve taken click here.

One reply on “New Mexico, Baby!”