To start, some odds and ends. Here are a few photos from my Brasilia book with modern day comparisons. I had originally meant to replicate the exact angle but forgot. You still get the general idea though. 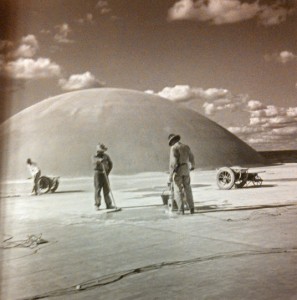 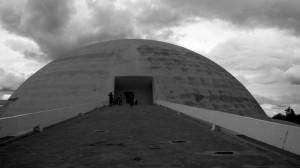 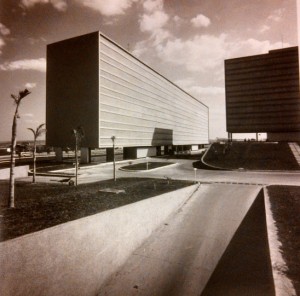 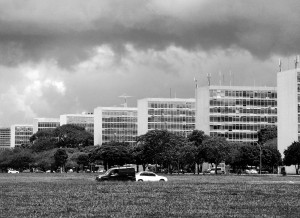 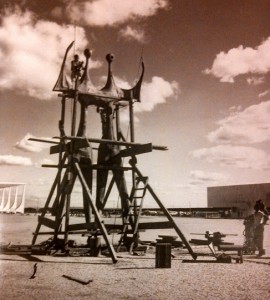 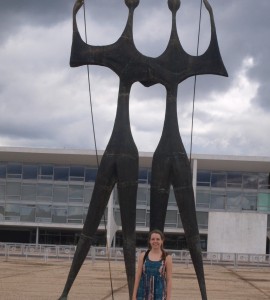 One thing that really surprised me about Brasilia was its extensive bike lanes. When I was first driving in from the airport I had actually noticed that they shut down an entire 4 lane highway and it was moderately filled with bikers, joggers, and families out for walks. Apparently they do this every Sunday. Brasilia had a better biking transport system than Colorado Springs does (though that’s not saying much). It is helpful that Brasilia is quite flat, and enjoys nice weather. I was pleasantly shocked upon seeing all of these bike lanes since one of Brasilia’s most noted flaws is its extreme reliance on cars. However, after asking some people about them, I discovered that the lanes are really only used for recreational biking, not transportation. I would guess this is because of the long distances between work and home, and the lack of a real biking culture there. But its nice to see that the infrastructure is there and that many people were taking advantage of them, even if it was just on the weekend. 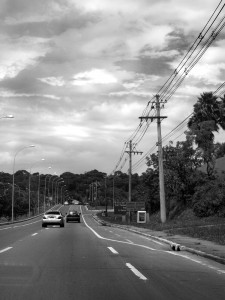 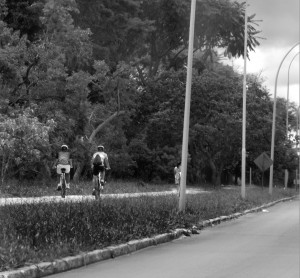 However, the same transportation problems that arise from the city’s construction have remained. I talked to a woman who said it takes her 2.5 hours (yes, HOURS) to get to work each morning.

Which brings me to the protests. Last summer Brasilia (along with other Brazilian cities) protested (and rioted). In Brasilia they stormed up onto the roof of the Congress building, and shot into the administrative buildings. The official reason was World Cup spending, but it was more about being fed up with corrupt public officials. In Brasilia, they mentioned that they were sick of the lack of reliable public transportation. The city built a massive soccer stadium which will most likely go unused after the city hosts the world cup semifinals this summer as the city’s only soccer team is in the third tier, and do not draw large crowds. The money could have been spent on more bus lines but largely went into government officials pockets. With a huge drop in the price of cars in the past few years massive traffic problems have developed despite the wide highways and extensive road system.

The problems that face Brasilia largely stem from the nature of its construction. By constructing a city in just 41 months, Lucio Costa had to make a lot of assumptions about not only how people live, but how they would live in the future. The famous cities of the world, ones which draw millions of tourists a year, took decades and centuries to form. That’s part of the appeal of these cities.

The problem with Brasilia, and most utopian, ultra-rational city plans, is that they fight against the inherit chaotic nature of humans. We live in cities to have our senses overwhelmed. We want to be surprised by what we see when we turn that winding corner-a beautiful old church or a brightly colored apartment building. Cities should be a bit of an assault on our senses. Brasilia has failed because it fought so hard against those things. I see the initial plan being chipped away at, and the city has regained a bit of a human touch to it, but the rich have dealt with the city’s failings by simply moving out. This is not only bad for city revitalization, but the very opposite of what this utopian city was built for.

Unfortunately I don’t necessarily see the solution within Brasilia’s grasp at the moment. The huge change that is coming is when the inner city apartments which are currently occupied by elderly widows turn over. Perhaps with a higher supply prices will drop and young families can move in-revitalizing the crucial city center and filling the streets with people.

The World Cup could also be the catalyst for social change in the area, which could start better city management. These things in turn could lead to a better city infrastructure and a voice for the city’s lower and middle class. I think these coming years will be a very interesting time for Brasilia and could really set the city on a good path, but it will certainly be an uphill battle.

I should take the time now to thank all the people who helped me get here-I couldn’t have done it alone! So thank you Carl Reed and Diane Alters, who helped with the content of my grant; my parents, who told me to go for it; my grandpa for all the great advice on photography, architecture, and life; the college and the President’s office; and of course the Keller Family for their generous funding of the Venture Grant.

–Here are some photos I took that didn’t quite fit into any post but I wanted to share: