Continuing a Journey: The Spirit and Legacy of Helen & Arthur Johnson 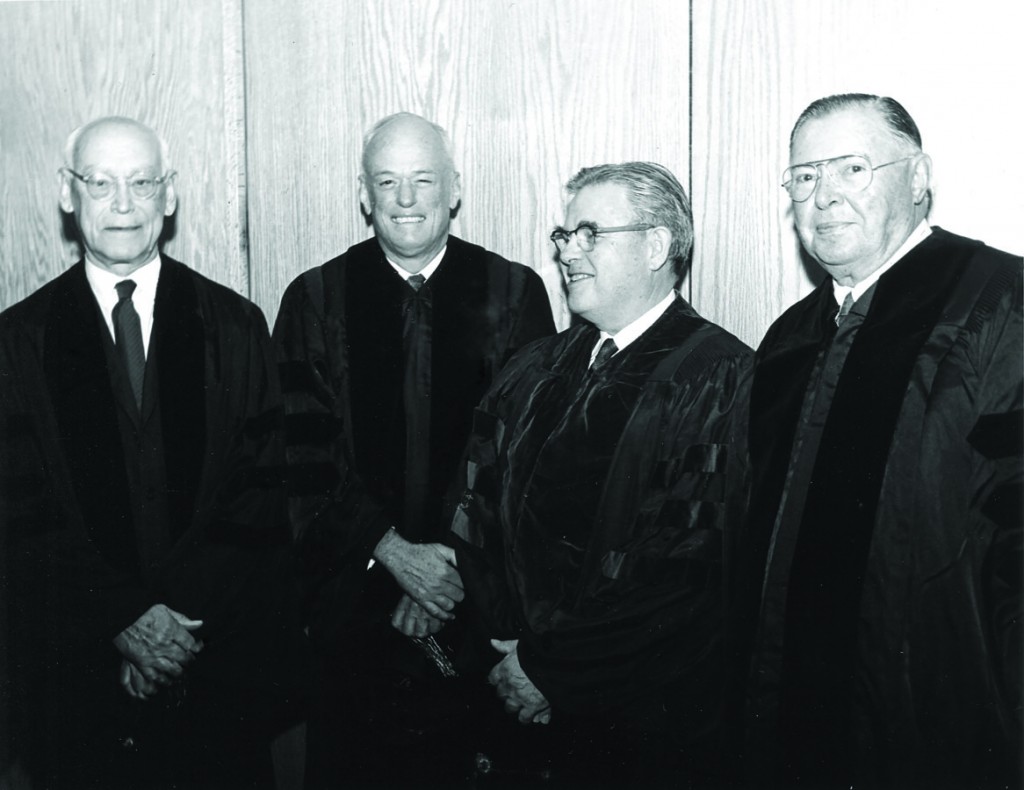 “During my life I have thought of various things that I would like to have happen to me but receiving a doctor’s degree from a college was a great surprise and pleasure, especially from Colorado College.” — Arthur E. Johnson, pictured above at far right, during Colorado College’s 1968 Commencement Ceremony.

In June, the Helen K. and Arthur E. Johnson Foundation committed $2 million to Colorado College in support of the expansion and renovation of Tutt Library. This ambitious project will provide a world-class academic center designed around the intense study and collaboration derived from the Block Plan. The Johnson Foundation gift makes possible a new Geographic Information Systems (GIS) Laboratory, a key part of our improved capability in mapping, 3D modeling, image processing, and geological survey.

This generous gift was, perhaps, not a complete surprise. Indeed, Arthur and Helen, the state of Colorado, and Colorado College share a long and rich history.

Then, like so many of his generation, came service in the Great War. Arthur met and married Helen Kenney in 1918 before leaving for France, where he served on the front lines with the U.S. Army’s 89th Division before coming home in 1919. After the war, Arthur returned to Midwest Oil, advancing rapidly within the company before acquiring a controlling interest in Argo Oil and several associated companies in 1932, earning him a reputation as “the best example of a Colorado oilman in history.” As Arthur and Helen grew in prominence, they gave back, both serving on many boards.

The couple’s legacy of hard work and generosity has defined the Johnson family for generations. Colorado College, an institution that came of age alongside the family, has been a consistent beneficiary.

In 1968, CC bestowed upon Arthur the honorary degree of Doctor of Science, completing his journey at the college from more than 50 years earlier.

“During my life I have thought of various things that I would like to have happen to me but receiving a doctor’s degree from a college was a great surprise and pleasure, especially from Colorado College,” Arthur wrote in a letter to then-President Lloyd Worner ’42 and Chairman of the Board of Trustees Russell Tutt.

By the time CC bestowed the honorary degree, the Johnson Foundation was 20 years old and had an established record of supporting organizations that relieved suffering, met basic human needs, promoted self-sufficiency, and enriched the lives of Coloradans.

“My grandparents had a variety of interests, and the foundation always supported a broad spectrum of organizations,” said Lynn Campion, Helen and Arthur Johnson’s granddaughter and foundation chair since 2005. “Education was always important to them. My grandfather thought highly of Colorado College and, later in his life, was impressed by CC’s innovative Block Plan.”

Over the years, the college, the foundation, and the Johnson family have benefitted from this shared commitment to education. Notably, in 1992, the foundation established the Johnson Scholars Program which has provided 19 outstanding Colorado students with scholarships to Colorado College. The recent gift to support the expanded library is the next step in that journey together.

“We’re thrilled that the Johnson Foundation has made a significant gift to a project at the heart of Colorado College’s academic mission — our library,” said CC President Jill Tiefenthaler. “Without longstanding partners like the Johnson Foundation, and the extraordinary example of Helen and Arthur, we would not be able to provide the high quality, personalized, and immersive education that defines the college.”

The Johnson Foundation has remained a family affair. Helen and Arthur’s daughter, Barbara J. Hartley, assumed leadership after her parents passed away, serving as chairman of the board for 27 years until her daughter, Lynn, took the reins.

“It was always expected to give back,” Campion said. “The mantra we’ve always followed is ‘give a hand up, not a handout.’ By giving someone a hand up, they are able to not only help themselves, but also to help someone else.”

Altogether, the foundation made more than $230 million in grants in the state of Colorado. The organization is undergoing a major transition, making several extraordinary “legacy grants” before continuing the philanthropic work through two newly formed foundations. These foundations, headed by the next generation of the Johnson family, will begin making grants next year.

“I have faith that my daughters and their foundations will make a difference in Colorado and around the world, just like my grandparents did,” said Campion.