From Building on the Block to Exploring the Planet 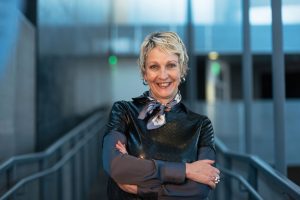 The end of President Jill Tiefenthaler’s nine-year tenure at Colorado College has taken an unexpected turn. On Jan. 14, Tiefenthaler announced her Aug. 1 departure to serve as the chief executive officer of the National Geographic Society, assuring sustained momentum in current initiatives, and reflecting on her time serving as president, which she described as “the greatest honor and joy of my long career in higher education.” In recent months, teamwork and engagement have taken on a new meaning for Tiefenthaler and the CC community.

As concerns around the Coronavirus heightened, Tiefenthaler and her leadership team made the difficult decisions to switch to distance learning for Blocks 7 and 8 and summer classes to minimize the spread of the virus. But the president is just as committed to the CC community as ever before as she finishes her final few months with the college. Tiefenthaler’s leadership has resulted in record fundraising achievements, increased community involvement, sustained expansion of campus resources, and access initiatives designed to serve dynamic, high-promise learners.

Tiefenthaler’s expertise on the economics of higher education has taken her across the country and the globe to speak on the topic. She has implemented transformative changes in financial aid and admission to increase access at CC, including the Colorado Pledge, Stroud Scholars, and the new test-optional admission policy.

These impressive initiatives are backed by countless hours of community discussion and collaboration. “Jill is one of the great listeners I’ve met. She gathers all viewpoints and uses them to inform her decisions, and made the effort with alumni of all ages. I feel so grateful for her dedication and connection,” says Chris Schluter ’65.

Year One and Beyond

Tiefenthaler dedicated her first year at the college to soliciting input, which she called her “Year of Listening.” This ultimately yielded “Building on the Block,” CC’s strategic plan. Reflecting on the many changes Tiefenthaler brought to life during her tenure, Director and Associate Professor of Feminist & Gender Studies Heidi Lewis says, “I shook up the campus in so many ways alongside Jill Tiefenthaler and most often with her support. And we’ve disagreed, laughed together, and lots in between. She’s been an incredible mentor, and I’m glad I got to bear witness and help move the needle.”

Tiefenthaler also experienced the Block Plan firsthand as a professor, co-teaching each year with her husband, College Research Professor Kevin Rask. Students who took their upper-level Economics of Higher Education course attended field trips to University of Colorado Colorado Springs, Pikes Peak Community College, the Colorado Department of Higher Education, and the State Capitol to learn from experts in the field and better understand public, private, and community college stakes in higher education.

“As a professor, she encouraged us to ask difficult questions and facilitated an exciting and fast-paced classroom environment,” reflects student trustee Lily Weissgold ’20, who took Tiefenthaler and Rask’s course her junior year. That year, Weissgold also attended the COP-24 climate conference with Professor Mark Smith’s Economics of International Climate Policy course, along with Tiefenthaler, Provost Alan Townsend, Director of Sustainability Ian Johnson, and trustees Marc St. John ’80, P’17 and Kishen Mangat ’96 in Katowice, Poland. “Part of what makes Jill so phenomenal is her connection to students both in and outside of the classroom,” says Weissgold. “She cares about so many issues, but most importantly, she cares about people, about learning as a community.”

Student engagement has always taken priority for Tiefenthaler. She hosted regular open office hours and a President’s Council that met each block to discuss key issues for students on campus, in addition to attending countless athletics competitions, plays, music, and arts performances, and many other student events. She could even be found at Tutt Library handing out study snacks during fourth week. “CC students are inspiring. They’re imaginative, hard-working, and funny. It’s been a true privilege to get to know them,” says Tiefenthaler.

From Rural Iowa to the Nation’s Capitol

One of four children in her family, Tiefenthaler grew up on a popcorn farm in rural Iowa. She learned the importance of partnership and hard work early on, doing her chores on the farm and showing her two younger siblings the ropes. Tiefenthaler discovered her passion for economics while attending Saint Mary’s College in South Bend, Indiana. After earning her M.A. and Ph.D. in economics from Duke University, Tiefenthaler joined the faculty of Colgate University in 1991, where she served as professor, department chair, associate dean of the faculty, and senior adviser to the president. She then served as provost and professor of economics at Wake Forest University, and joined CC in 2011.

The National Geographic Society’s mission is to illuminate and protect the wonder of our world. National Geographic identifies and supports dynamic explorers — scientists, innovators, educators, storytellers, youth — and educates and engages a global audience through classroom resources, museum exhibits, events, and social, film, and printed media. As CEO, Tiefenthaler will create a strategic plan, head fundraising, and lead the Society’s team to execute the plan, as she has done at Colorado College. Tiefenthaler plans to approach this process as she did at CC; by listening and learning first.

Townsend will serve as CC’s interim president during the college’s search for the next president, and Dean of the Faculty Claire Oberon Garcia P’07 will assume the role of interim provost during that time.

“It’s been a challenging semester, but this community has come together to learn and grow time and time again,” says Tiefenthaler. “I’m confident that the next president will bring new ideas and perspectives to ensure  a promising future for CC.”

For the Colorado College community, Tiefenthaler’s move is undeniably bittersweet.

“Jill captured the energy, the here and now urgency that prevails in the Block Plan at Colorado College the minute she arrived on campus. Her efforts have ensured the college [will have] an enviable and bright future going forward,” says Ted Sulger ’84, P’19.

“More than anything, I’ll miss her warm smile and friendship,” says Gordon Aoyagi ’67.

But it’s only goodbye for now; both of Tiefenthaler’s and Rask’s children, Owen and Olivia, are CC Tigers, so their ties to the college will remain strong.

“We’re so excited to come back as CC parents,” says Tiefenthaler. “This is an incredible community, and one that we’re grateful to be a part of throughout our lives.”

Through President Jill Tiefenthaler’s leadership, the college has achieved significant advances and further strengthened its ties with the community. Major accomplishments and initiatives include: