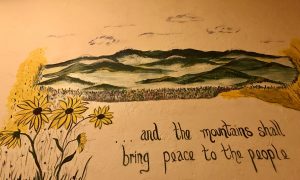 Painting from a local cafe in the valley. Photo by Carly Valerious.

Farmers are pressing ahead with potato crops in a water crunch. To cope with climate change, residents of Crestone are turning to meditation to calm their anxious minds. And, despite just being evacuated from their homes due to a massive fire, residents of Salida are accepting that fire danger is a new reality in their life on the mountain.

“If the next 20 years look like the last 20 years, we have a problem. If we do nothing, we will pump the aquifer to the bottom,” Rio Grande Water Conservation District general manager Cleave Simpson said.

Snow packs are looking bleak and groundwater levels are falling. The valley is experiencing a climate shift to aridity, Simpson said.

But farmers say they are determined to stay the course.

“Farming is a way of life. —- There is peace in farming,” said Samuel Essah a potato researcher at the San Luis Valley research station.

Some farmers are changing their techniques in an effort to adapt to dwindling water. At Rockey Farms, brothers Sheldon and Brendan Rockey have cut overall water use less than one acre foot a year to irrigate 500 acres.

Other farmers are pumping from the aquifer as if there were no limits. This threatens to draw down the valleys already drained water supply. Farmers have organized into sub districts and are taxing themselves to try and reduce overall pumping.

Sheldon Rockey said he favors a gradual approach in the phased imposition of fees for pumping groundwater.

“I am concerned about the valley. I don’t want to see family farms close, because we raised the fees too high,” said Sheldon Rockey, third generation farmer, who helps lead one of the new subdistics.

“I am optimistic. We are going to be farming here for 30 years” He said.

Across the valley at Crestone, elderly hippies and spiritualists increasingly are gripped with concerns about global warming. They too are adapting with many turning to meditation.

“People are looking for ways to calm their minds down,” Canaly said.

Even residents recently evacuated from a wild fire just north of the san luis valley near salida express optimism.

Climate change has lead to bigger, more frequent wildfires. Yet, Jerry Mallet, a former Chaffee County commissioner, and others residents south of Salida show no intention of moving out of their mini mansions in a burn zone.

Back in his home after evacuation, Mallet said he accepts the risk.

Wildfire forcing evacuations “is part of life here, and we know it,” Mallet said “I am an optimist. The agencies will save my butt,” he said, referring to federal firefighters.