Sue Navy, board president of High Country Conservation Advocates (HCCA), described the alarm expressed by high school students at Crested Butte’s recent meeting for its Climate Action Plan, which was released early this November. Despite the generally favorable climate of Crested Butte, many locals are overwhelmed by the possibility that the land and animals will suffer due to human causes.

HCCA is a nonprofit organization based in Crested Butte that was formed as a response to proposals to mine molybdenum on the town’s beloved Mount Emmons, known by residents as “Red Lady.” Posters from the past 42 years advertising the annual “Red Lady Salvation Ball” completely cover a wall as you enter the organization’s office, representing a proclamation to their mission of protecting the wilderness of Gunnison County.

Having overcome three mining proposals through the decades, the organization continues to campaign for a mine-free Red Lady. Their work today, however, extends beyond the protection of this single mountain.

“A lot of what we do now is related to climate change,” said Navy.

Having lived in Crested Butte for the past 48 years, Navy has experienced the region’s changing climate firsthand.

“Winters were a lot colder than they are now,” Navy said, recalling one year where she and her friends were “basically skiing in t-shirts.”

The change in temperature and snowfall during the winter could negatively affect the ski industry of Crested Butte, which plays a major part in the town’s economy. Retired chief executive officer of Crested Butte Mountain Resort John Norton emphasized the importance of the 100 days between Christmas and the end of March where the ski resorts get the bulk of the business that sustains them year-round.

“If those become fragile then you’re going to see some seismic changes,” Norton said. 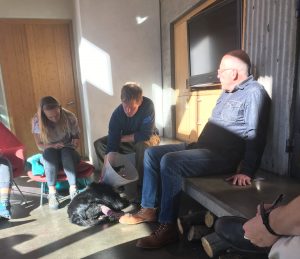 John Norton (right) speaking with Bruce Finley and students at his home in Crested Butte.

Besides skiing, mountain biking and trail running are also popular outdoor activities loved by locals and visitors. But with an increase in the community’s population and summer tourists, Navy says that people are using the backcountry and “loving it to death.”

She stressed how it’s not only humans that are imperiled by these changes. Impact on trails are changing animal migration patterns by cutting off their migration routes, and she is frightened at the thought of species disappearing from Crested Butte.

Last winter took out almost half of the population of Gunnison sage-grouse when the snow arrived later in the year and turned to ice, making it difficult for the grouse to get to food sources, Navy said. She also expressed concerns about how the high altitude pika are being forced to move further up to reach cooler elevations and the warming streams could affect trout and other fish that thrive in cold water.

In spite of her fears for the future, Navy is optimistic about her work and thinks that the natural environment of Crested Butte provides people with solace and a generally “upbeat attitude.”

“We have this haven for our mental health⁠—I think that goes a long way to keep us from jumping off a cliff,” she said.