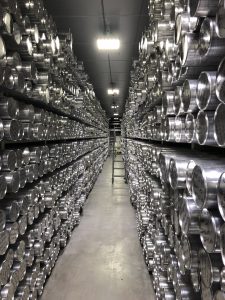 DENVER – Call him the Ice Librarian. He wears a brown beanie over a long ponytail. He has a curly goatee and glasses.

Richard Nunn. His library is not books. He is the keeper of the nation’s ice cores, up to 420,000 years old, pulled from deep under Greenland, Alaska, and Antarctica. The library is a refrigerated section of a government warehouse kept at -30 degrees.

“Without the knowledge of the atmosphere in the distant past, we can’t know our climate’s future,” he says, standing outside the freezer of the United States Geological Survey warehouse in Denver, Colorado. He cuts samples of the ice. Scientists around the country study the small bubbles of ancient air trapped within. This allows comparisons between our air and the air of the ancient past.

“Because of this, we know three things. One, the earth goes through natural periods of heating and cooling. Two, the causation between greenhouse gasses and temperature is undeniable. Three, right now the concentration of C02 is higher than ever on record.”

Inside the freezer, there are Calvin and Hobbes strips taped to the wall. Stuffed penguins sit on a windowsill. A sign on the door to the colder section of the freezer, at a balmy -40 degrees, establishes a rule. “No shirt, no shoes, no ice core.”

“It’s pretty whippin’ cold” the Ice Librarian says. He zips up his parka. He steps inside.

He shows a 120,000 year old piece of ice, clear as glass. Rows and rows of stacked silver cylinders contain the history of the climate. One wall, he says, contains only the two-meter long chunks of a singular 3,000 meter ice core.

One ice core can take up to four years to drill, he says. He walks past the cores and a specialty saw used to cut the ice. Operating a power saw at -40 can be risky. He walks past a red box labeled Amputation Kit.

Scientists from around the country hang out in the warehouse. There are dusty coffeepots in boxes next to cassette players, and an old Ski-Doo with a Frisbee in the back. The Frisbee says “Antarctic Expedition ‘97”.

“I like working here because it’s for humanity, not profit.” But the slow rate of action against climate change frustrates him. “Still,” he says, “the earth’ll be fine. Humans might not.” His hands settle to his sides. Then he cracks a smile. “But I’m optimistic.”