DENVER – A freezer that operates at -11° Farenheit is an extreme setting for a workspace. For Richard Nunn, this freezer is his office.

However, he doesn’t mind because he believes he has one of the most important jobs in the world.

Nunn organizes and slices ice cores stored at the National Science Foundation Ice Core Lab (NSF-ICL) in Denver and sends them to climate scientists at research institutions around the country. The study of ice cores stored at the lab has been essential to verifying the correlation between greenhouse gases and planetary warming, which has given the scientific community much-needed evidence for supporting climate change theories.

Ice cores are “the best window we have into the past – better than tree rings or sediment pools” Nunn said. By analyzing the bubbles in the ice, scientists can recreate the atmospheric conditions and temperatures of the Earth for thousands of years. The longest ice core at this particular lab reaches a depth of 3,206 meters below surface, and has given scientists the ability to glimpse 420,000 years into the past. 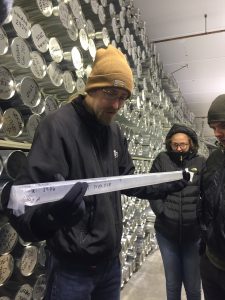 “The planet will be fine, Earth is always changing and has experienced changes much more dramatic than this, but it’s humanity that might not be able to adapt this quickly,” Nunn said. The atmospheric concentration of Carbon Dioxide in the air is currently at around 405 ppm, and our planet hasn’t even seen concentrations above 300 ppm in 8 – 10 million years.

Now that the lab has helped to establish the prevailing view on climate change, which purports that human production of greenhouse gases are the primary reason for this warming, we asked Nunn: “what’s next for the lab?”

The lab will continue to drill and store ice cores for future research, but Nunn thinks the most important step is getting politicians on the same page as scientists in order to enact some changes. “Unfortunately, the political debate is about three steps behind the scientific debate,” he said.

Politicians are still arguing whether or not the planet’s warming is a result of humans’ behavior even though there is ample scientific evidence to support this notion. Nunn said that he hopes to see the government transfer subsidies away from oil and gas, and instead towards renewables in order to speed up the transition away from fossil fuels.

We got to follow Nunn through the freezer room, bundled up in our puffy jackets and wool hats trying to keep moving as not to get too cold. I inspected a thousand year old piece of ice he had out for display and found myself in awe of how these microscopic pockets of air have revealed to us about our planet’s atmosphere.