Colorado College is one of four institutions engaged in new exploration of the world’s largest ice shelf, the Ross Ice Shelf in Antarctica.  Characterization of the crust and bedrock geology beneath the Shelf has long been hindered by the presence of the thick ice sheet and ocean upon which it rests.  To characterize the ice-ocean-continent system, ROSETTA-Ice undertook airborne geophysical surveys over three seasons. Data collected include gravity, magnetics, radar, LiDAR, and more. The LC-130 aircraft were flown by the New York Air National Guard and supported by McMurdo Station personnel and logistics.  GNS Science, New Zealand, and the US Geological Survey contributed instruments and scientific staff.

Primary objectives of the ROSETTA-Ice project activities, were to model the bathymetry beneath Ross Ice Shelf at 15 km resolution or better, determine the characteristics of the ocean cavity beneath the Shelf, and improve the understanding of factors that affect Ross Ice Shelf stability.  New results from ROSETTA-Ice were published in Nature Geoscience in 2019. 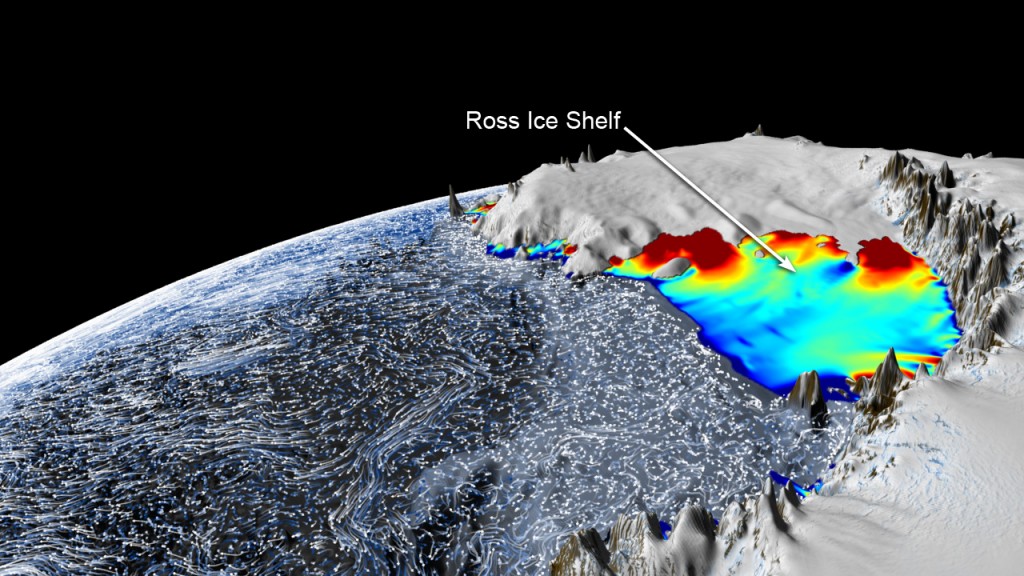 Training of young scientists is an integral part of the multi-institution program. From Colorado College, Alec Lockett, a 2016 geology graduate, participated in the 2016 and 2017 field data collection. Check out his blog, posted during his weeks based in McMurdo Station.  Scott Springer, of Earth Space Research, also has an informative and well-illustrated blog, with fresh and spirited views of Antarctica.  Matt Tankersley, a 2018 graduate, used new aeromagnetics data to interpret crustal structure beneath Ross Ice Shelf, with results presented at AGU in 2018.  Zoe Krauss, a senior Physics major, refined this work, by modeling potential fields data along flight line profiles. CC undergrad investigators Skye Keeshin and Gina Jozef helped to unveil the first high resolution radargrams of Ross Ice Shelf, with key findings presented at WAIS 2017. Sarah Packard used shallow ice radar profiles for a focused study of rifts in the ice shelf and Jonny Norwine [See updates on current status of ROSETTA-Ice student investigators, at the bottom of this page.] 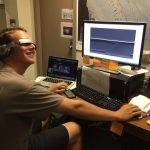 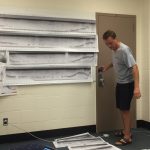 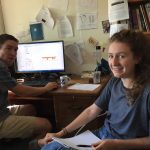 Matt and Zoe getting down to work on potential fields data 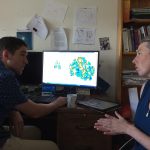 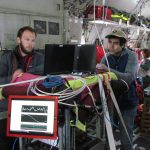 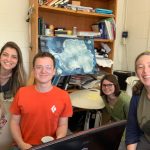 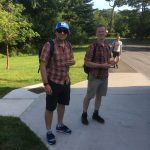 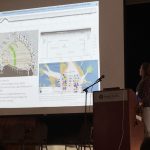 The final flights for the ROSETTA-Ice airborne survey were completed in December 2017.  Quality control, leveling, and integration of data from the three sequential seasons was achieved in July 2018.  Data analysis and interpretation, and the convergent work among scientists of all the institutions is underway, leading to preparation of manuscripts for publication and data sharing of the important new high resolution datasets for the Ross Ice Shelf region.  ROSETTA-Ice data are available for polar science community invesigations. 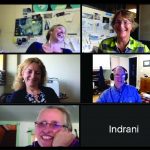 A typical scene: ROSETTA-ICE PIs on a ‘convergence’ call