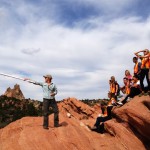 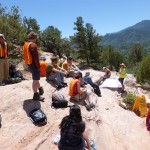 Garden of the Gods brittle deformation 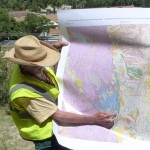 The southern Front Range in Colorado Springs and Manitou Springs offers an expansive record of Rocky Mountains evolution contained within rocks of Proterozoic to Recent age. The Phanerozoic succession is nearly complete, with only the Silurian Period not represented. Sedimentary rocks were the subject of early field investigations reported in initial issues of the Geological Society of America Bulletin (e.g., Cross, 1894; Crosby, 1897), and they provide key records of the Pennsylvanian Ancestral Rocky Mountains orogeny and Cretaceous–Tertiary Laramide orogeny. Generations of Colorado College geology professors and students have undertaken research and contributed to advances in understanding of the geological evolution, economic resources, and landscape evolution of Colorado.

Some of the earliest geologists in Colorado were affiliated with Colorado College, for instance, George Hapgood Stone, whose photographs from the 1890s are in the Special Collections of Tutt Library.  Stone and others in his cohort recognized granite-hosted sandstones that long presented an irresolvable puzzle in Colorado Geology.  Recent progress on this enigmatic rock association, now known as Tavakaiv quartzite, has been covered in the media: