Two days ago I experienced one of the most epic days I have yet to experience at CC. John Gould (one of our professors) even said that it was one of his favorite days at CC, and he’s been here a lot longer than I have!

Our final performances took place all over campus and were wildly different from one another. It’s one of those things where you kind of had to be there, but I’ll try to give you a little taste of each one.

1. First, Chris gave a long and convincing monologue, which seemed to be about a romantic relationship, but was actually about nationalism. I think a lot of the political science majors in the class realized this right away, but I didn’t realize it until Chris made the big reveal afterwards, and it blew my mind. I suddenly saw every detail of the speech he had just given in a new light. It’s amazing how much clearer politics can become when it is mapped onto interpersonal relationships. 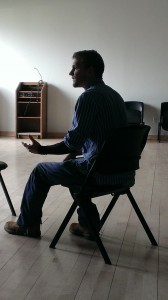 2. Then Anya, Lauren, and Shauna performed a multidisciplinary piece–involving painting, dancing, and storytelling–about the experience of growing up in a military family. There were so many layers to it: it touched on freedom of expression as opposed to duty, what constitutes a home, and how to come to terms with one’s family, among other things. All of this was centered on the interplay between various bright colors, on the one hand, and white, on the other hand.

3. I didn’t have much time to process it all before we drove to a local middle school for John Russell and Tim’s performance. We were asked to enter the cafeteria and each sit down at a different table of sixth graders. We were then supposed to engage them in conversation and work different facts about dropping out of high school (we were given a sheet to work from) into the conversation. I was absolutely terrified to do this, but I found a quiet table with two girls and begun talking to them. I cheated by merely giving them the sheet to read if they wanted to, instead of reading it to them. I still had a good conversation with them, though. Next, John and Tim staged a slow motion “race” in the middle of the cafeteria. One of them was a lot faster than the other, but they both got to the finish line and both got graduation caps. A lot of the kids got really into the “race” and were cheering them on, which was sweet to see. It’s impossible to say if the performance will have any long-term impact on those kids, but it did seem to inspire them for the moment.

4.  Next, we went to the quad, where Mac, Nawar, and Zach had set up a huge canvass. Mac painted the word “release” on it, and then they began inviting people to throw paint balloons on the canvass. It was really fun, and created something beautiful as well. The project was meant to offer a “release” for all the stressed out CC students trying to make it through Fourth Week. A lot of people gathered to participate and watch, and everyone seemed to be having a good time, so I would say it was a success! 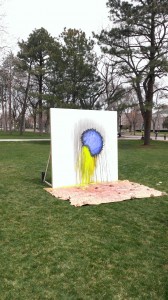 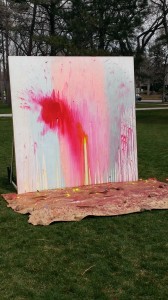 (Crowd not pictured–everyone had to stand back to avoid getting splattered!)

5. We had a lunch break and then, back in our classroom, Luigi and Aaron performed a Brechtian agitprop piece mocking the current government of Venezuela. It was absolutely hilarious—I couldn’t stop laughing throughout the whole thing. Describing it punchline by punchline wouldn’t do it justice, but all I will say is that I got a square of toilet paper on which was written “revolution, revolution, revolution” as a souvenir.

6. Taylor’s performance was next and it darkened the mood instantly. It was about race, immigration, and the “American Dream,” and involved re-mixed voice-overs, including some poetry by Langston Hughes. It also involved Taylor sleepwalking with a white box (that said “dreamer” upside-down) over his head and later with a black garbage bag over his head. There was an all-white bed, white pajamas, a little white lamp, white walls, a white ceiling, and a white floor. And there was eerie, all-black visual art scrawled on the walls. It gave me chills. 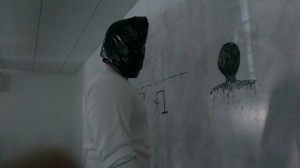 7. I didn’t want to follow that, but my project was next. I took the class to the library and, acting as a character called “Official History,” I began reading from a book on CC history that I had found in the library. Ever since returning from Serbia, I had been collecting personal stories from various kinds of people. All the stories were about things that happened to people while at specific locations on CC’s campus. I gave slips of paper containing these stories to the class and asked them to read the stories when something in the history I was reading inspired them to do so. For example, I read a passage about William Slocum and various people read events that had happened in Slocum Hall. When each person had read from all slips of paper they had (most people had two), they ran to the location the story took place in, found an object, ran back, and gave me the object. As that happened, I slowly transformed from the character of Official History into myself, and began telling my own personal stories related to the objects they brought me and the locations these objects were from. The performance ended when I asked the class to leave the library and the collection of official books about CC behind. I intended to create a kind of alternative history that was specific to people and locations. I also tried to deconstruct the binary of official versus unofficial history at the same time, by blurring the boundary between my own persona and the persona of “Official History.”

8. After leaving the library, we went to the gym, where we all participated in Hanna and Liz’s performance. We were all asked to work out in place, while Hanna and Liz protested unrealistic body standards and eating disorders through movement, posters, and a soundtrack. They did this on the top floor, where the cardio machines are, and then also led us to the weight room, where they did a second performance specific to common male body image issues. (They were not stereotyping based on gender, but responding to the reality that the vast majority of people working out on the cardio machines are women, and the vast majority of people working out in the weight room are men.) I thought their performance was very powerful, due to the location they chose.

Overall, I was blown away by the creativity and bravery of my classmates.

Well, this is my last blog post for this class. This block has been amazing! Thank you for (virtually) sharing this journey with me. Dovidjenja!

One reply on “The Art of Insurgency Final Projects”