The Navajo Nation and the wetlands of Mexico have something in common: Both should be at the table of discussion when it comes to water rights of the Colorado River Basin, according to two experts in their fields.

More than 175 Colorado College students, faculty and area residents heard the speakers’ cases for their causes Monday, Jan. 30, during the fifth presentation of the 2011-2012 Monthly Speaker and Conference series, sponsored by Colorado College’s State of the Rockies Project.

The series is titled “The Colorado River Basin: Agenda for Use, Restoration and Sustainability for the Next Generation,” and features experts talking each month through February about issues surrounding the Colorado River.

Despite having century-old legal backing for water rights, the Navajo Nation, whose reservation lies almost entirely within the Colorado River Basin, is still fighting to quantify its water rights and get safe drinking water delivered to its 180,000 residents, Becker said. 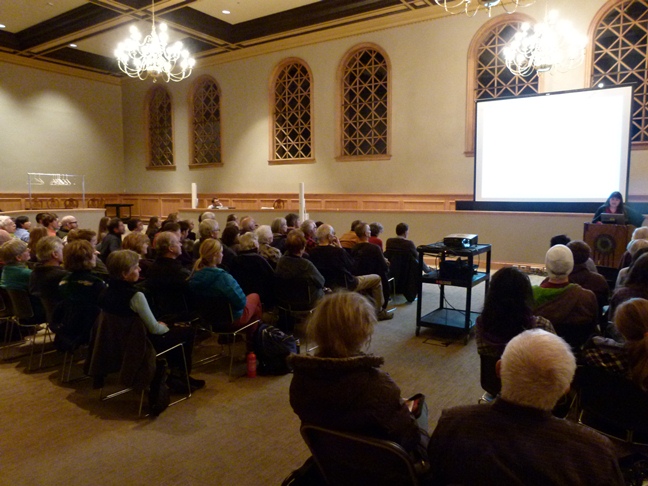 But a project she has been working on, the $1 billion Navajo Gallup Water Supply Project, is underway to help accomplish the goal of improving the health of the Navajo Nation by delivering clean drinking water, and fostering economic development on the reservation, which stretches across New Mexico, Arizona and Utah.

“It’s so exciting,” Becker said. “This project was unspeakable for decades, but when you talk about a resource like water, over time, people start doing the right thing. We all need access to water.”

Hinojosa-Huerta, whose contributions to environmentalism include efforts to restore the Colorado River delta, also provided evidence that progress is being made. Since 1997, his conservation organization, Pro Natura, has been working on creating international relationships for water policy and restoration of the delta.

Water rights for the Colorado River currently are over-allocated by 16 percent, he said. The river, one of the most regulated in the world, has 10 major dams and 80 major diversions, which he said have led to the loss of 80 percent of wetlands, significantly reduce river flows and decreased the population of Riparian-related birds. Drought conditions in the past few years haven’t helped, either.

But an initiative to restore the delta and improve environmental conditions at priority sites in the U.S. and Mexico recently has made strides, he said. Negotiations and collaborations between the two countries on how to manage the basin have resulted in new strategies and tools, Hinojosa-Huerta said.

For example, 30 percent of the effluent from a wastewater treatment plant is being used for wetlands use, and agricultural drainage in the largest wetland in the delta is being desalted by the Yuma Desalting Plant in Arizona, to protect the area, called Cienega de Santa Clara. 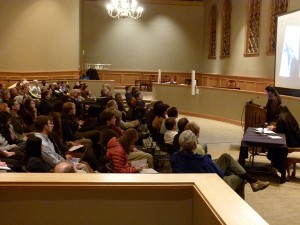 “What we learned is that bi-national cooperation is possible and essential – 10 years ago it wasn’t possible to talk about an agreement for restoration. Now that’s exactly what’s happened,” Hinojosa-Huerta said. “We have a good regulatory framework, and we know that with the right policies and support from different stakeholders, we can make it work. Water allocation is feasible. Protection of wetlands is feasible.”

Asked by an attendee during the question-and-answer period whether any mechanical methods can be utilized to increase water supply – such as covering reservoirs to reduce evaporation — Hinojosa-Huerta said conservation and efficiency appear to be the current mode of thinking.

When another audience member asked whether water supply can be protected from “enemies like fracking,” an oil and natural gas drilling process that uses copious amounts of water, Hinojosa-Huerta said that legal allocation of water will be necessary to secure adequate supplies for human consumption and environmental protection.

The final speaker event will be held Monday, Feb. 6, from 7 to 9 p.m. in the Gates Common Room in Palmer Hall. Harris D. Sherman, a CC alum and the Under Secretary for Natural Resources for the U.S. Department of Agriculture, will present “Healthy Forests for the Colorado River Basin.”

The monthly Speaker Series culminates with the State of the Rockies Project annual conference, April 9-10, on the CC campus. A stellar lineup of officials working on the future management of the Colorado River Basin will give presentations.