Whether we turn on a faucet in Los Angeles, Denver, or Phoenix, the water that flows out of it depends on the Colorado River for its supply. And the Colorado River depends on national and private forests as its source, a 1964 Colorado College graduate who works for the Obama administration said during February’s 2011-2012 Monthly Speaker and Conference Series.

Sponsored by Colorado College’s State of the Rockies Project, the event was held Monday, Feb. 6, in the Gates Common Room of Palmer Hall on the CC campus. This sixth and final Speaker Series was as well attended as previous presentations, drawing about 175 students, faculty and members of the general public.

The series is titled “The Colorado River Basin: Agenda for Use, Restoration and Sustainability for the Next Generation,” and has featured experts talking for the past six months about issues surrounding the Colorado River. Topics have ranged from legal problems regarding water rights and allocations to engineering challenges going into the future. 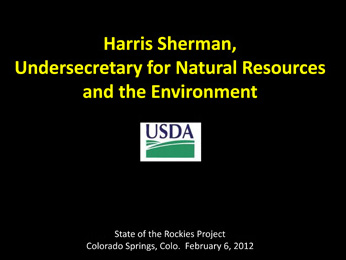 “Our ability to protect this green infrastructure is every bit as important as our ability to build dams, canals, water treatment plants and other infrastructure,” he said. “Most people don’t realize that half of the water we drink comes from national forests, along with state and private forests.”

Sherman said 66 million people get their water from national forests, including 27 million along the Colorado River Basin.

But the U.S. Forest Service is facing a host of challenges in managing its 155 forests:

Despite the challenges, Sherman said the U.S. Forest Service is addressing the problems through creative solutions. Partnerships and collaborations are a key factor. The city of Denver, for example, is paying the Forest Service $17 million to work on 40,000 acres of national forest land to help protect five watersheds.

“We call this payment for eco-systems services. The Hayman Fire resulted in tremendous erosion, which almost brought Denver’s water system to its knees. They had major problems with filtration and water treatment issues,” Sherman said. “Denver’s now decided to be proactive.”

The Forest Service also is looking at how to create new markets for wood products. Because the housing and pulp and paper industries do not use as much wood as in the past, there aren’t as many avenues to sell trees that have been thinned or expired. One possibility is to convert wood chips to electricity. But Sherman said that hasn’t yet reached the point where it’s economically feasible.

Other efforts include educating homeowners to create clear areas between their houses and forest land and working with environmental groups about the benefits of thinning forests and replanting. 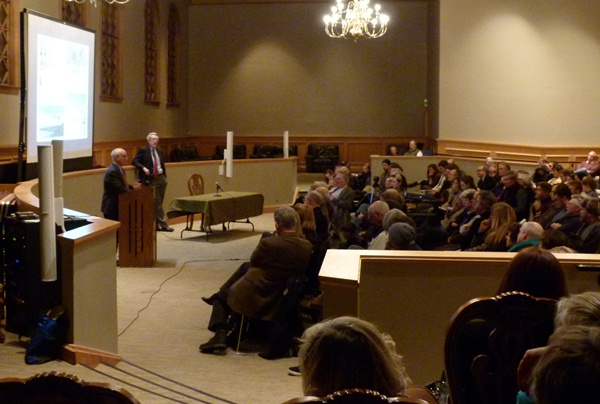 During a question-and-answer session, a student asked whether the Forest Service views fires as a natural process that has benefits. Sherman said the philosophy that all fires are bad has changed in recent years.

“For a long time, the Forest Service didn’t let fires burn because they were not good. The result: We’ve ended up with these vast, dense, monolithic forests, which is partly why we have the condition we have today. Fire has to be carefully controlled; we do 3.5 million acres a year of prescribed fires. But when you have a fire near a community or an area that has a high amount of recreation, you have to be careful. When they get out of hand, you have an unfortunate situation. It’s a balancing act.”

The monthly Speaker Series will culminate with the State of the Rockies Project annual conference, April 9-10, on the CC campus. A stellar lineup of officials working on the future management of the Colorado River Basin will give presentations, and organizers will release the annual Rockies report card.

Check the Rockies website, http://www2.coloradocollege.edu/stateoftherockies/conference.html, for more information regarding the conference.