According to Blackwell Books in London (the dealer who sold us these books), the Expostulation is a poem about Ariovistus, Arminius, Barbarossa, and Georg von Frundsberg visiting the author in a dream. Perhaps of interest to book studies folks, two of its pages didn’t print properly and someone added the missing text in manuscript. This image shows the manuscript text on the verso of leaf 9. 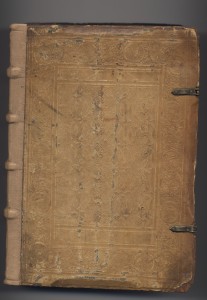 The Chytraeus has a contemporary pigskin binding with working clasps. A history of the Augsburg Confession, the text was translated into many languages and frequently reprinted after it first appeared in 1576. Our copy has marginalia from at least one previous owner and a rebacked spine.