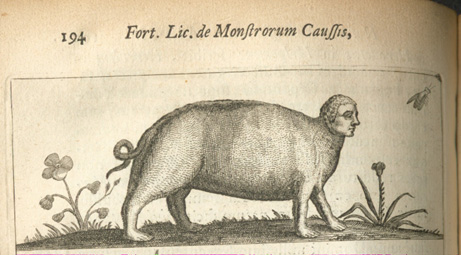 In late 2010, Special Collections purchased a 1665 edition of Fortunio Liceti’s De Monstris, an important work on human and animal abnormalities. Unlike his predecessors, Italian scientist Liceti (1577–1657) believed that physical anomalies occurred naturally, not as divine punishment for sin. This edition, printed in Amsterdam by Andrea Frisii, contains many engravings depicting both the possible (conjoined twins) and the impossible (human-animal hybrids such as the one in the image above). More of Liceti’s images are available at Yeeeeee.