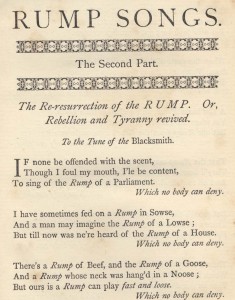 During a recent book move in Special Collections, we discovered, by chance, some wonderful surprises in our rare book vault. For example, it turns out we have a full Rump … a nineteenth century facsimile of a two volume set first published in 1662, officially titled Rump: or An Exact Collection of the Choycest Poems and Songs Relating to the Late Times. The books contain political poems and songs and, well, as you can guess, a lot of butt jokes. Mark McDayter at the University of Ontario has a rather thorough website about Rump, and a digital version of the  facsimile is available at the Internet Archives. (I learned from McDayter that you can tell the difference between the 1662 first edition and the 19th century quasi-facsimile by looking at the S’s. The original edition uses the long ∫ throughout; the quasi-facsimile never uses it.) 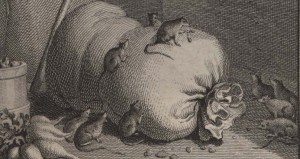 And if that illustration wasn’t enough to give you a nightmare, here’s a different kind of nightmare for you, from another recent discovery, George Cruikshank’s Comic Alphabet (1837). (We have many other alphabet books, including a popular pop-up.) A full version of the Cruikshank is available digitally here.