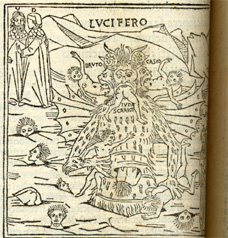 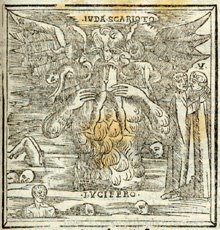 In August of 2011, we purchased a 1536 edition of Dante’s Divine Comedy for use alongside our 1491 edition, a donation from Jane Carruthers Hale in memory of her father John A. Carruthers. A great many versions of the Comedy were published in the early years of printing, perhaps as many as 40 editions between 1472 and 1550. Both of our editions have woodcut illustrations: at right you can see two renderings of Lucifer devouring Brutus, Cassius, and Judas Iscariot.

Addendum, July 18, 2016: the Pokemon craze has come to Colorado College, and we’re happy (and a bit alarmed) to report that a creature known as Rattatta has been enjoying (and possibly nibbling on) our 1491 edition of Dante: 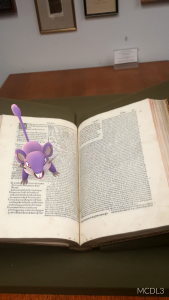